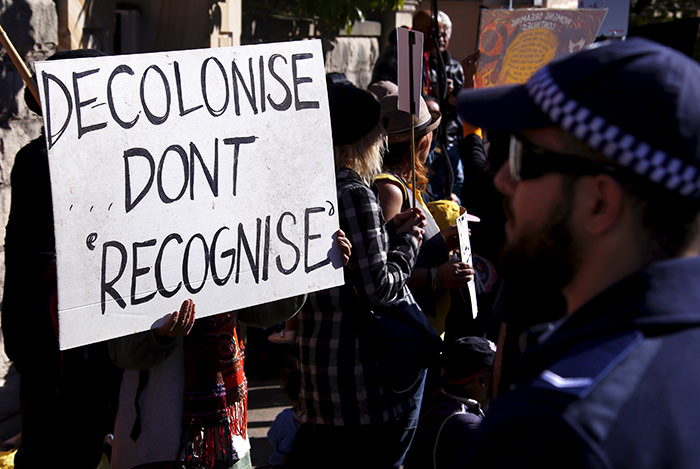 Police stand in front of protesters outside the venue for a meeting between Australia's PM Tony Abbott and 40 of the nation's indigenous representatives in Sydney, July 6, 2015 (Reuters Photo)
by Jul 06, 2015 12:00 am
Australia's political and indigenous leaders met on Monday to start working on an agreement that would see the "First Australians" recognized in the country's constitution.

Prime Minister Tony Abbott said the move would end the "echoing silence" in the nation's founding document that fails to acknowledge the presence of indigenous people living on the land before white settlement.

There is disagreement whether the change should include a clause outlawing racial discrimination and guaranteeing indigenous rights, or a simple statement recognizing that indigenous people lived on the land for 60,000 years before the first convict fleet arrived from England in 1788.

When Britain established colonies in Australia, the land was regarded legally as Terra nullius, meaning nobody owned the land and it was free to be occupied.

More than 40 indigenous leaders met Abbott and opposition leader Bill Shorten in Sydney to start a national series of community conferences around the country over the next 18 months.

Abbott said he hoped there could be a national convention to settle on the wording of the amendment by the end of 2016 or early 2017.

"We are good enough, big enough and brave enough to do this but it is important that we get it right," Abbott said.

Kirsty Parker, co-chair of the National Congress of Australia's First Peoples, said it was a good step to righting a wrong in Australia's history.

"We believe this process must bring about substantive reform. We don't believe that symbolic change alone is enough," she said.

It will take a referendum to change the constitution requiring a majority of people in a majority of the six states to pass.
Last Update: Jul 06, 2015 12:53 pm
RELATED TOPICS