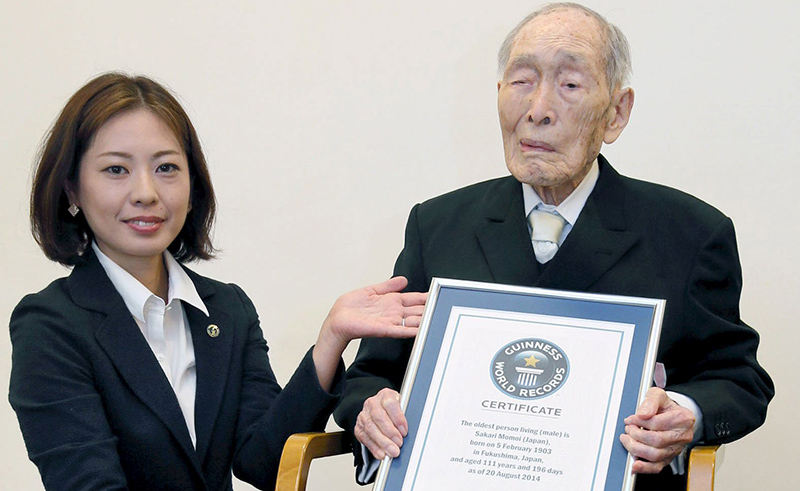 Sakari Momoi (R) receives a Guinness World Records certificate naming him as the world's oldest man at 111 years of age, in Tokyo, in this photo taken by Kyodo August 20, 2014 (Reuters Photo)
by Anadolu Agency Jul 07, 2015 12:00 am
A Japanese man recognized as the world's oldest living male by Guinness World Records has died at the age of 112 at a Tokyo hospital, local media reported Tuesday.

Sakari Momoi, a retired teacher who lived in Saitama city north of Tokyo, passed away due to chronic kidney failure Sunday, Kyodo News cited the municipal office as saying.

Local officials recalled how Momoi had recited Chinese poetry in a resonant voice when Saitama's mayor paid him a visit at a Tokyo nursing home in Sept. 2013. He had appeared to be in good health and was eating three daily meals at the time.

The former agricultural chemistry teacher had been listed as the oldest man by Guinness in Aug. 2014 following the death of a Polish-born man at the age of 111 in the U.S. in June 2014. Momoi had also served as principal at public high schools in the prefectures of Saitama and Fukushima.

Following the death of Momoi, the Health, Labor and Welfare Ministry said that a 112-year-old resident of central Nagoya, Yasutaro Koide, has become the oldest man in Japan.

According to recent data from the Turkish Statistical Institute, there are around 115,000 people in Turkey who are at least 90 years old.

An Anadolu Agency story in 2009, however, refers to a woman living in a city in Turkey's southeast who claims to be 125 years old, although lax ID card procedure makes this difficult to confirm.