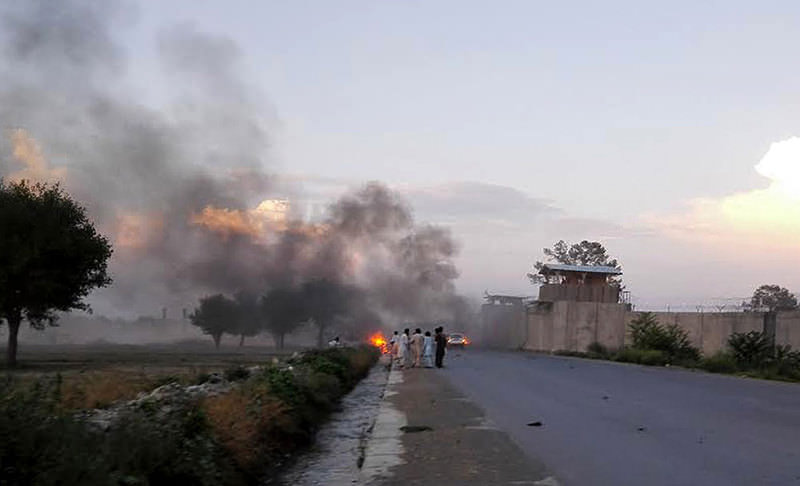 by Jul 13, 2015 12:00 am
The death toll from a suicide attack at a military base in eastern Afghanistan rose to 33 on Monday, as casualties from the Taliban's insurgency continue to mount despite nascent peace talks.

The Sunday evening bombing came at a military roadblock near Camp Chapman in Khost province, where both Afghan and foreign troops are stationed, shortly before iftar, the meal breaking the Ramadan fast.

Mubarez Zadran, a spokesman for the provincial governor, and a senior police official confirmed the new toll, which included 27 civilians and six Afghan security personnel -- up from 18 reported killed earlier.

"Twelve children and three women are among the dead," said Zadran.

There was no immediate claim of responsibility, but the Taliban -- who last week held their first face-to-face peace talks with the Afghan government -- have often targeted Afghan and foreign troops.

At least 12 civilians were also killed in twin roadside bomb blasts over the weekend, officials said, blaming the attacks on the Taliban.

The insurgents launched a countrywide offensive in late April, stepping up attacks on government and foreign targets despite the nascent peace talks in what is expected to be the bloodiest fighting season in a decade.

The UN mission in the country has said almost 1,000 civilians were killed during the first four months of this year, a sharp jump from the same period last year.

In 2009, Camp Chapman was the target of a spectacular suicide attack claimed by Al-Qaeda. Seven CIA American officials were killed in the deadliest assault on the US agency since 1983, when eight officers died in an attack on a military base in Beirut.

In 2010, 24 Taliban militants, some wearing US uniforms, were killed when they tried to storm Camp Chapman and another nearby US base, Camp Salerno.

The base was hit again by a suicide car bomb in 2012 that killed three Afghans in a blast powerful enough to rattle windows four kilometres (two miles) away.

Camp Chapman is located less than four kilometers from the city of Khost, which is near the Pakistani border, a volatile region where the Taliban, but also a multitude of armed groups, hold sway.

NATO ended its combat mission in Afghanistan in December, leaving local forces to battle the Taliban alone, but a residual force remains for training and counter-terrorism operations.