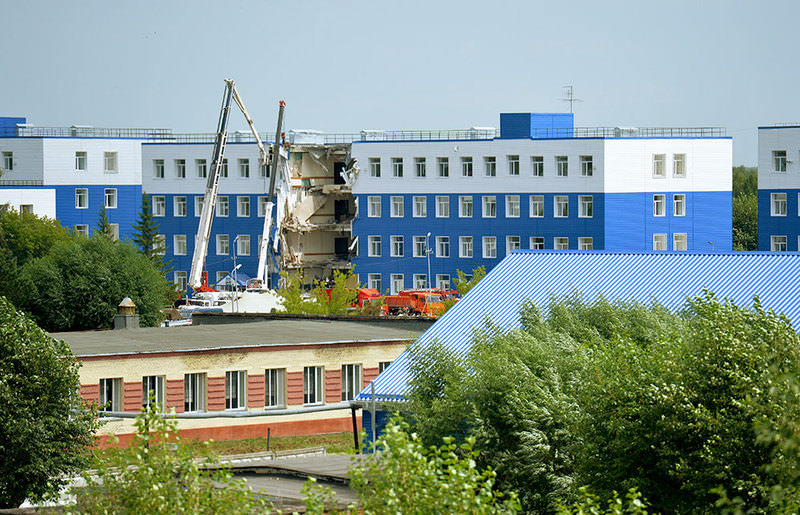 by Jul 13, 2015 12:00 am
Twenty-three Russian soldiers were crushed to death by rubble after their military barracks collapsed in Siberia, the Russian defense ministry said on Monday.

All four floors collapsed in one section of the building in the Siberian city of Omsk on Sunday evening as 42 Russian paratroopers were resting.

"All 42 soldiers who were under the rubble have been found. Twenty-three of them are dead," said defense ministry spokesman Igor Konashenkov.

President Vladimir Putin has been informed of the accident in Omsk, located about 2,200 kilometers (1,400 miles) east of Moscow, a Kremlin spokesman said.

In footage shown on Russian television, soldiers formed a human chain to pass bricks and other debris from one to another in order to clear the mountain of rubble.

"Half of the heap has been cleared now," acting commander of Russian paratroopers Nikolai Ignatov said in televised remarks.

Teams of rescue workers, search dogs, and a plane with medical equipment from Moscow have been dispatched to the scene, along with military prosecutors.

Some of the injured victims have been airlifted for treatment in Moscow.

A representative of the regional military investigators told the Interfax news agency that a probe had been launched into possible negligence.

According to a list published by Life News website, most of the victims were male and aged between 18 and 24.

About 50 relatives of the injured or dead soldiers have already arrived in Omsk, the regional governor said.

According to the defense ministry, the 242nd training center whose barracks collapsed trains junior officers and armored infantry vehicle drivers, among others.

On Saturday a section of a residential building collapsed in the Urals city of Perm, killing two.