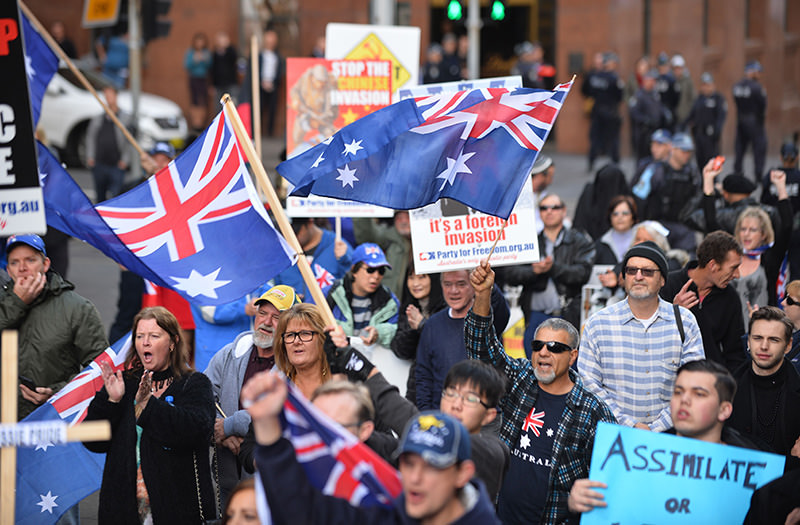 by Anadolu Agency Jul 19, 2015 12:00 am
Hostility and anti-Islam sentiment erupted on Australian streets for a second continuous day Sunday as rolling rallies continued across the country with anti-racism protestors confronting right wing Islamophobes.

Police on horseback were forced to separate the opposing sides in Sydney.

Anti-racism activists told Anadolu Agency that police in Melbourne exhibited "brute force" and that pepper spray was sprayed indiscriminately into the crowd. More than 100 people needed to be treated.

A statement issued to Anadolu Agency by the Melbourne Street Medic Collective states that the spray was even used on "an injured man who was struggling to breathe, was losing consciousness, and was awaiting an ambulance".

Spokesman for the Islamic Council of Victoria Kuranda Seyit attended yesterday's rally in Melbourne and admitted to Anadolu Agency that he thought the use of pepper spray by police was "an over-reaction".

Seyit expressed "sadness" at the level of violence and lack of tolerance and decorum displayed on both sides.

He said: "The message that racism isn't cool was lost in the violence between rednecks and anti fascist anarchists."

In Melbourne four people were arrested.

In Sydney today there were five arrests as protesters from the anti-Muslim group "Reclaim Australia" and a counter group, under the banner "No Room for Racism" violently clashed in Martin Place near the scene of last year's Lindt Cafe siege.
Last Update: Jul 19, 2015 10:51 am
RELATED TOPICS