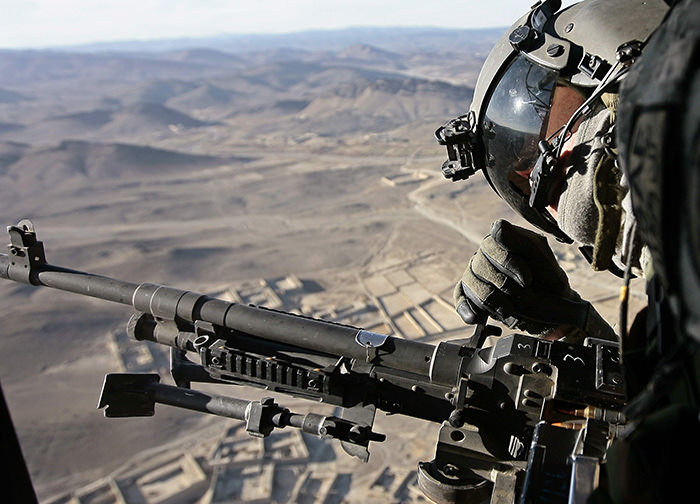 A U.S soldier from Task Force Viper looks out as a Chinook CH-47F transport helicopter flies back to FOB Salerno, Afghanistan, December 2, 2009 (Reuters Photo)
by Compiled from Wire Services Jul 20, 2015 12:00 am
At least 14 soldiers were killed Monday in a US airstrike on an Afghan army checkpoint, an official said.

The incident took place in Baraki Barak district of Logar province, south of Kabul. The district is largely controlled by Taliban insurgents.

Other Afghan officials also reported the strike, though they gave slightly different number of casualties.

"We are aware of an incident involving US forces in Logar. It is under investigation," said Colonel Brian Tribus, a US military spokesman in Afghanistan.

District governor Mohammad Rahim Amin says the NATO strike was likely a mistake, due to bad coordination in an area where Taliban insurgents are highly active.

A U.S. military official in Afghanistan, speaking on condition of anonymity in line with regulations, said they are aware of an incident in Logar and are investigating it.

The NATO-led coalition ended its combat mission in December, but US forces are still involved in some counter-terrorism operations, including airstrikes and night raids.
Last Update: Jul 20, 2015 12:04 pm
RELATED TOPICS