Chinese woman dies after trapped in escalator, but saves son 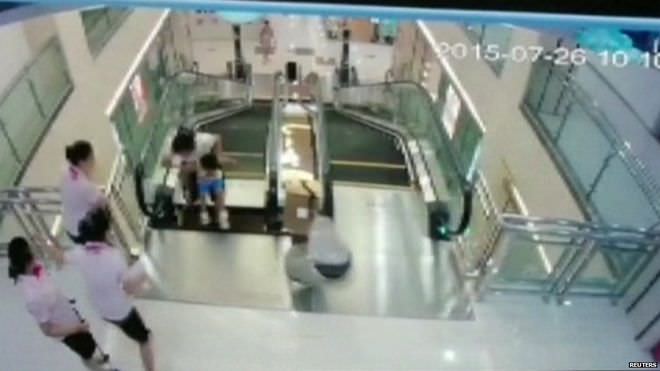 | Photo: Reuters
by Compiled from Wire Services Jul 27, 2015 12:00 am
A Chinese woman died after being trapped in a shopping mall escalator, but not before pushing her 2-year-old son to safety.

Sunday's horrific accident in the central city of Jingzhou was caught on surveillance camera footage that circulated heavily on the Internet in China.

The woman — identified in media reports as 30-year-old Xiang Liujuan — is shown reaching the top of the escalator when the section of landing platform she had stepped onto suddenly collapses, trapping her inside the still-moving machinery.

The footage shows that Xiang managed to push her son into the arms of shop attendants near the top of the escalator. The attendants tried to pull her to safety, but Xiang fell into the mechanism and was killed.

The state-run People's Daily's online edition and other media outlets said her body was recovered four hours later, after crews disassembled the escalator.

Local authorities are investigating if proper maintenance checks were carried out.

Video of the accident rapidly became the most searched for topic on China's social media hub "Sina Weibo," according to state news agency Xinhua.