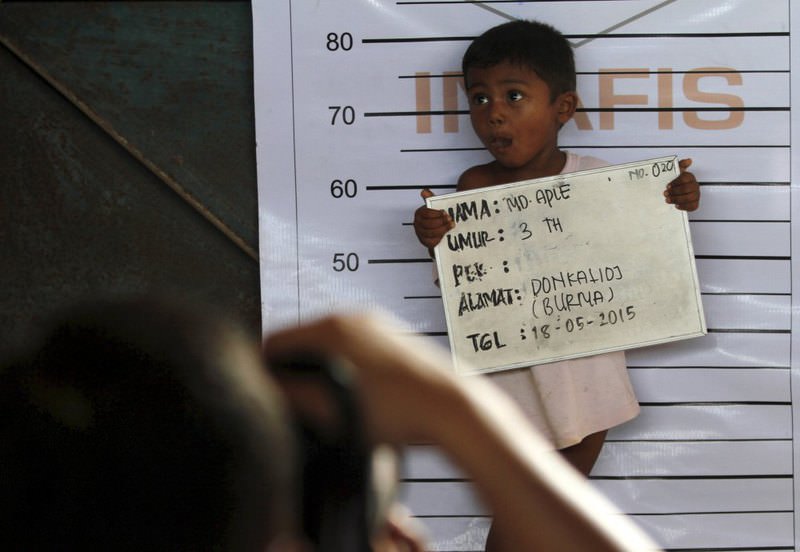 A Rohingya child who recently arrived by boat has his picture taken for identification purposes at a shelter in Kuala Langsa in Indonesia's Aceh Province.
by Daily Sabah with AA Jul 27, 2015 12:00 am

A week after anti-Islam and anti-immigration rallies in Australia, opposition leader Bill Shorten reversed his position on turning refugee boats back, drawing criticism from the Refugee Council

The reason for the backflip, according to Shorten, is to eliminate the risk of people drowning and to stop people smuggling. In an exclusive interview with Anadolu Agency (AA), Power said Sunday that turning back asylum seeker boats, regardless of the justification, is "pandering to the politics of fear."

Scoffing at the ALP's assertion that there are significant points of difference between their policy and the ruling coalition's, Power said the opposition's form to date on asylum seekers makes it difficult to take them for their word. "We've recently seen the Labor Party support government legislation designed to muzzle whistleblowers," he said, referring to the Border Force Act passed by parliament in May.

The legislation allows for a jail sentence of up to two years for anyone who speaks publicly about issues at detention centers, part of Australia's policy of holding asylum seekers at offshore sites in Nauru and Papua New Guinea. "That is appalling," Power exclaimed. "Now we are expected to believe that this is a political party with good intentions and deeply concerned about people seeking protection from persecution?" Power's comments come after Labor delegates voted down late Saturday a motion to reject Shorten's call to implement asylum seeker boat turn-backs during the ALP national conference in Melbourne.

Despite angry protesters, who interrupted proceedings by unfurling a banner on stage reading "No refugee towbacks," the left faction's push to quash the turn-back policy and close offshore detention facilities, if they do not meet "humane and safe conditions," did not carry. Shorten has outlined what he described as "a compassionate, humane and safe approach to irregular migration." He has committed to build "a regional humanitarian framework to improve the situation of asylum seekers," donate AU$450 million ($328 million) over three years to the work of the United Nations refugee agency, UNHCR, and double Australia's annual refugee intake to 27,000.

He has also expressed willingness to abolish Temporary Protection Visas that currently keep people in a permanent state of limbo, give those found to be genuine refugees a permanent Australian visa, create an independent statutory advocate to protect the interests in children seeking asylum and establish greater transparency in border protection. Confessing "deep disappointment" that a future ALP government will now have the ability to turn back asylum seeker boats, Power told AA: "What Australia is signaling to the world is that we clearly don't want to have any role in providing asylum for people. The real challenge is not how do we stop them but how do we do provide effective protection for those who most need it?"

Power reflected on a report released in 2012 by an expert panel on asylum seekers. He spoke of the way in which the former Prime Minister Julia Gillard-led ALP government "moved very quickly on the re-establishment of offshore detention but dragged its feet on the more constructive recommendations."

He let out a sigh and feigned a laugh when asked about his thoughts on Shorten's pledge to increase the refugee intake by 27,000. "That's a terrible response from somebody in my position, but what I've heard has made me so depressed, I haven't looked at the details," he confessed. "But we will certainly be analyzing every positive recommendation and hounding them not only to implement them if they're elected to government, but also challenging the government on its policies."

Last week, Australia came to the fore after anti-immigration and anti-Islam rallies in different cities were staged with anti-racism activists clashing with police. Around 200 members of the anti-Islam and anti-immigration groups Reclaim Australia and United Patriots Front groups waved Australian flags and chanted at a rally in Sydney on Sunday with signs declaring "Say no to Sharia" and "Immigration is the elephant in the room." They were met by around 250 counter-demonstrators who carried banners that said: "No racism, no Islamophobia." Police, including riot squad officers and mounted units, packed Martin Place in the heart of Sydney's central business district to separate the rival groups. In recent years, Islamophobia and xenophobic sentiments have been increasing in Europe and around the world with large demonstrations against immigration.
Last Update: Jul 27, 2015 11:04 pm
RELATED TOPICS