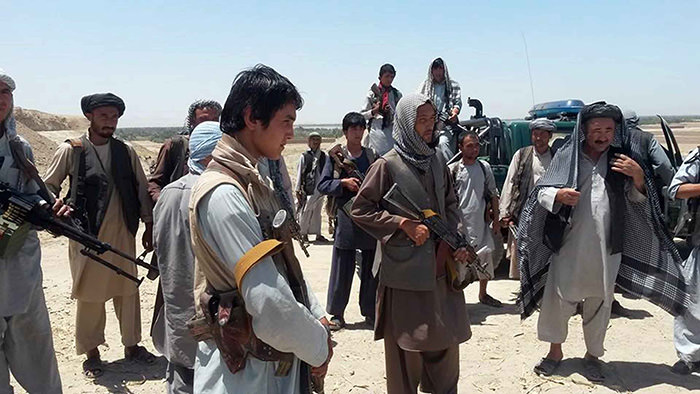 |AA Photo
by Anadolu Agency Jul 30, 2015 12:00 am
The Afghan government's announcement of the death of Taliban chief Mullah Mohammad Omar sparked a rush within the group to elect a new leader, security sources said. After reports of Mullah Omar's death leaked from government sources throughout Wednesday, the Afghan Presidential Palace confirmed the news, saying that Mullah Omar died in Pakistan two years ago. The information was passed on to the Afghan government by Pakistan, a government official told Anadolu Agency (AA) , and came as the Taliban reportedly intensified discussions around a new leader while they prepare for a second round of peace talks with the government.

Former Afghan diplomat Ahmed Saedi said the leadership held a meeting in Pakistan on Tuesday to choose between Mullah Omar's son Yaqoob and the current acting leader, Mullah Akhtar Mansoor. "They are going to hold another meeting in Karachi on July 31, but it is possible that ISI [Pakistan's intelligence agency] will disrupt the meeting. On the other hand, Mullah Akhtar Mansoor, who nominated himself for the position, is to hold a meeting with the support of ISI in Quetta tomorrow," said Saedi, adding that most Taliban commanders support Yaqoob, who is in his mid-20s. Saedi and other analysts have said they fear the leadership contest could lead to disunity within the Taliban and potentially scupper the chances of achieving peace through talks with the Afghan government. "I think the peace talks will face a dead end. The Taliban group will splinter into groups over the Taliban leadership position," said Saedi. "Some of them will join with newly-emerging fighters of [Syria-based] Daesh [the Arab acronym for the Islamic State of Iraq and al-Sham (ISIS)]."

The Afghan government, in the statement confirming Mullah Omar's death, said the news meant "grounds for the Afghan peace talks are more paved now than before, and thus calls on all armed opposition groups to seize the opportunity and join the peace process." A highly-placed Afghan government official told AA that a security meeting was held Tuesday to discuss the implications of Mullah Omar's death and how it could affect the peace talks with the Taliban.

The mysterious Taliban chief has rarely been seen and went into hiding after the U.S.-led invasion of Afghanistan in 2001, with even many of his fighters left unaware of whether he was alive. Only two weeks ago, the Taliban released an Eid al-Fitr message attributed to Mullah Omar calling on Taliban fighters to back the peace talks. The message was also seen as a challenge to fighters who had left the Taliban in recent months and organized under the banner of ISIS. The news of Mullah Omar's death has raised concerns that more fighters could follow. Kabul-based analyst Sami Yusufzai downplayed fears that ISIS could benefit from a Taliban power struggle. "I don't think ISIS poses any significant threat to the Taliban in Afghanistan and other parts of our region because of the sectarian balance in favor of Sunnis," Yusufzai told Pakistan's Geo TV. "But I fear that the power struggle might divide the Taliban, which will not be a good omen. It will badly affect the ongoing peace process."
Last Update: Jul 30, 2015 5:14 pm
RELATED TOPICS