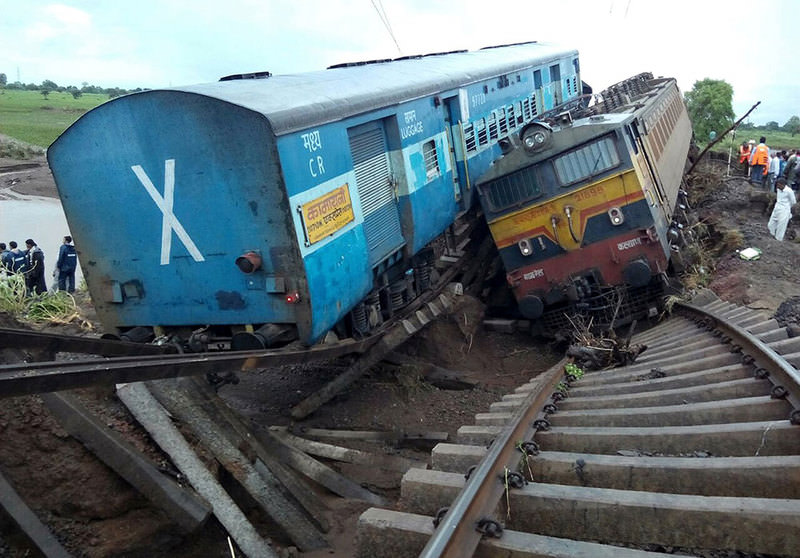 by Aug 05, 2015 12:00 am
Two passenger trains derailed after flash floods struck a bridge they were crossing in central India, killing at least 27 people in the latest deadly accident on the nation's crumbling rail network, officials said.

Rescuers searched through the night for passengers trapped in the trains that toppled after a surge of water from a nearby rain-swollen river struck the tracks in Madhya Pradesh state.

Some 300 people were rescued after 10 of the trains' carriages and one engine derailed minutes apart outside the town of Harda close to midnight on Tuesday, police and other officials said.

The Kamayani Express, travelling from the financial city of Mumbai, derailed just minutes after a surge of water from the Machak river sank the tracks on a small bridge, chairman of the railway board A.K. Mittal said.

The Janata Express, coming the other way from the eastern city of Patna to Mumbai, crossed shortly after, railway ministry spokesman Anil Saxena told Indian television.

Passengers said they were thrown awake by the falling carriages which quickly filled with muddy water.

"I was sleeping and suddenly I felt a jolt. I woke up and saw that all the passengers were screaming and running," Manoj Mongi told the Hindustan Times newspaper's website.

"I came out. I saw three women floating, but I could not save them," he added.

"The water level on the track was almost waist-high," Shashi Bhushan Pandit, another passenger, added.

Railway Minister Suresh Prabhu told parliament in New Delhi that the number of confirmed deaths so far was only 12, but two officials in Madhya Pradesh put the death toll much higher.

State railway police chief M.S Gupta said 27 people had been killed and another 70 injured. "All the coaches have been cleared and all bodies have been collected from inside," Gupta told AFP.

Madhya Pradesh government spokesman Anupam Rajan said that 29 bodies had been recovered, giving a breakdown to the Press Trust of India news agency as 13 men, 11 women and five children.


Television footage showed a row of carriages lying on their sides in a field of mud, as rescuers with specialist cutting equipment were deployed to the site along with doctors.

"The train was off the tracks and water was everywhere. And within a second, the whole train derailed and we all got trapped inside," a passenger told regional TV.

"Nobody came for us, we were stuck there for three to four hours."

Rescuers were initially working through the night mostly in darkness, with the flood waters hampering their efforts.

"The entire area has been reeling under heavy rainfall for the last few days. The roads are badly damaged, even the access road," Saxena said.
The heavy flow of water had washed away some of the bodies from the carriages into a field, police chief Gupta said.

Monsoon rains have hit large swathes of the country in recent weeks, flooding rivers and roads and claiming some 180 lives mainly in western and eastern India.

The government has ordered an inquiry into the cause of the accident, while Prime Minister Narendra Modi expressed his sadness at the loss of life.

"Authorities are doing everything possible on the ground. The situation is being monitored very closely," Modi said on Twitter.

India's railway network, one of the world's largest, is still the main form of long-distance travel in the vast country, but it is poorly funded and deadly accidents are frequent.

India's government has pledged to invest $137 billion to modernize its crumbling railways, making them safer, faster and more efficient.

An express train ploughed into a stationary freight train last May in northern Uttar Pradesh state, killing 26 and injuring 44 others.