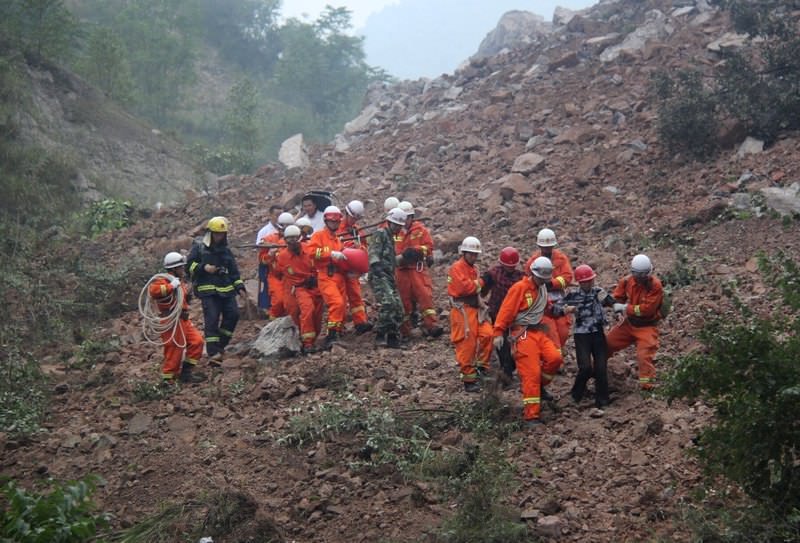 by Aug 12, 2015 12:00 am
More than 60 people were missing in China Wednesday after a landslide buried the living quarters of a mining company under one million cubic metres of earth, state media said.

The landslide covered 15 employee dormitories and three houses in Shanyang county in the northern province of Shaanxi shortly after midnight, an official at the county's propaganda office told AFP.

It said four people had been rescued and rushed to hospital. Another 10 at the site had avoided being trapped when the landslide struck, it added.

Police, firefighters, mining rescuers and medical staff had been sent to the scene and residents in the area evacuated, the county government said in a statement.

Photos posted on news websites showed rescue workers in orange jumpsuits standing next to a pile of earth and rocks at least four times their size. Mechanical backhoes were atop the mound.

President Xi Jinping said he was following the rescue efforts closely and every effort should be made to prevent casualties and further disasters, according to state broadcaster CCTV.

The mine's operator was identified by Xinhua as Wuzhou mining company, which according to its parent company is mainly a vanadium producer.

Separately, an accident at a coal and gas mine on Tuesday night in the southwestern province of Guizhou killed 10 people, provincial work safety authorities said in a statement.

Rescue efforts were under way, the statement Wednesday said.

Xinhua reported Wednesday that 56 miners left the shaft safely after the accident, with five injured and three more still missing.

China, the world's largest producer of coal, is grappling to improve standards in the sector, where regulations are often flouted and corruption enables bosses to pursue profits at the cost of worker safety.

The official number of mining fatalities is declining but some rights groups argue the actual figures are significantly higher due to under-reporting.

The country is also prone to landslides, often caused by floods but with lax management of industrial sites sometimes a factor.

In 2008, 277 people died in a mudslide in the northern province of Shanxi after an illegal mining waste reservoir burst its banks following heavy rain.

A total of 58 government and company officials were convicted over the disaster and sentenced to prison terms, some to life.

In 2013 a vast volume of rock crashed down a mountainside east of the Tibetan capital Lhasa, burying 83 people in a mineworkers' camp.