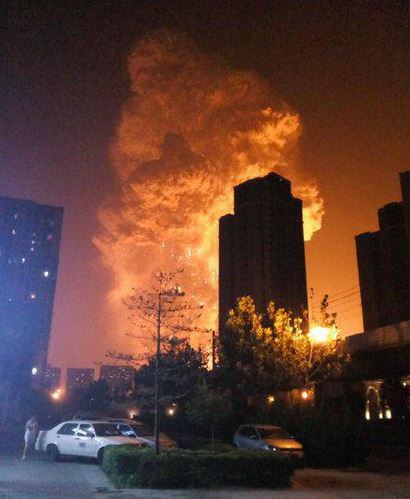 by Daily Sabah with Wires Aug 12, 2015 12:00 am
A massive explosion hit an industrial area in the northeastern Chinese city of Tianjin on Wednesday evening, triggering a blast wave felt several kilometres away, killing at least 50, critically injuring over 30 and leaving 700 others hospitalized, reported state media on Thursday.

State broadcaster China Central Television reported that the blast had erupted in a shipment of explosives at around 11.30 pm local time and that an unknown number of people had been injured, the South China Morning Post said on its website.

Xinhua reported that residents fleeing their homes "feared an earthquake." The cause of the blast and and number of casualties were unknown, the news agency said.

Videos of the explosion showed flames lighting up the night sky and state-run news agency Xinhua quoted the residents in nearby districts saying that the blast had shattered windows. Citing a local hospital, Xinhua said more than 50 people had been injured while domestic sources claim over 100 have been hospitalized.
Last Update: Aug 13, 2015 2:43 pm
RELATED TOPICS