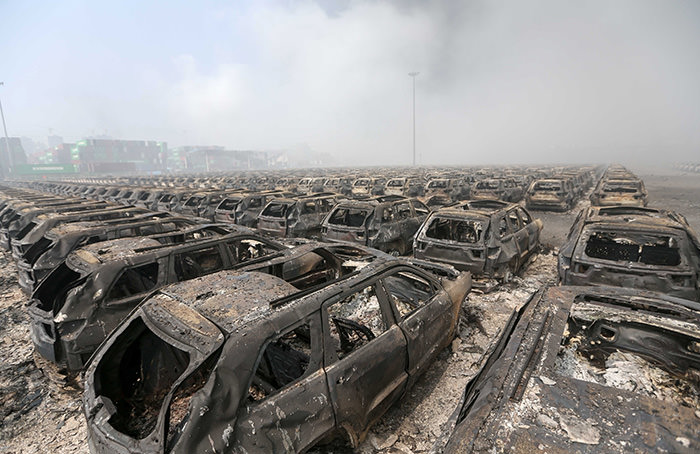 Brand new cars parked in Tianjin port are seen badly damaged at the site of the massive explosions in Tianjin on August 13, 2015 (AFP Photo)
by Compiled from Wire Services Aug 14, 2015 12:00 am

As fears over toxic chemical poisoning the air rise, Chinese authorities begin work on dangerous chemicals in Tianjin, where two massive explosions at a chemical storage facility killed at least 55

Chinese authorities struggled Friday to extinguish fires and identify dangerous chemicals at a devastated industrial site in Tianjin, one of China's biggest cities, two days after giant explosions killed dozens and left residents in fear of being cloaked in a toxic cloud.

The massive explosions killed at least 50 people and no less than 17 of them were firefighters who came to tackle the initial blaze. Many others were migrant workers who lived in dormitories nearby. More than 700 injured were hospitalized, 70 of whom were still in a critical condition Friday, according to Xinhua. Eighteen firefighters remain missing, it said. The explosions at the world's 10th largest port were so big they were seen by satellites in space and registered on earthquake sensors. The China Earthquake Networks Center said the magnitude of the first explosion was huge, and the second was even more powerful: the equivalent of 21 metric tons of TNT or a magnitude-2.9 earthquake. Officials in the northern port city of Tianjin told a news conference they did not yet know what materials were at the hazardous goods storage facility that exploded, or the cause of the blast.

But Chinese media and environment group Greenpeace warned a host of potentially extremely dangerous chemicals may have been stored there. At least 700 tons of sodium cyanide were at the site, along with other dangerous substances, and the poisonous chemical had been detected in nearby drains, Beijing News initially reported. But the report was no longer available on the newspaper's website on Friday, giving rise to suspicions that the Chinese government is clamping down on sensitive information relating to the tragedy.

The official Xinhua news agency said a team of 217 nuclear and biochemical materials specialists from the Chinese military had traveled to Tianjin to inspect the site. With dozens of people still missing, authorities were also focused on trying to find any more potential survivors.

There was a rare moment to cheer on Friday morning when rescue workers pulled a 19-year-old firefighter from the rubble. However up to 1,000 firefighters were still struggling to extinguish blazes at the site, with smoke billowing from three areas, adding to uncertainty over whether more chemicals may be leaking.

Some police wore no protective clothing, while others had full-face gas masks, although an environmental expert told an official press conference that toxic gas indicators were within normal ranges and the air "should be safe for residents to breathe." At a nearby office building, security guard Liu Zongguang, 50, wore a cheap surgical mask. "I'm wearing this mask because I saw some police wearing them, but I also saw some without masks, I don't really know what to do," Liu said. "I'm really scared, but I don't even know what to be scared of, the government hasn't said anything, nothing about what we should do to keep our families safe from the chemicals."

Greenpeace warned on Thursday that rain could transfer airborne chemicals into water systems. It said it was "critical" that authorities monitored the situation closely and identified what substances were being released into the air. Tianjin work safety official Gao Huaiyou told reporters that authorities did not know which of the many dangerous substances the company was authorized to store were on the site at the time. As a transshipment facility, items were normally only kept for brief periods and "the types and amount of the dangerous materials are not fixed," he said. The company's own records were damaged in the blast, he added, and information from its executives was unreliable as it did not accord with its Customs filings.

Online commentators expressed fury at authorities, who are regularly accused after disasters of cover-ups. "Please be honest and say what you know. Don't hide the truth!" one poster urged on social media. The People's Daily, the official mouthpiece of China's ruling Communist Party, said that the facility's construction "clearly violated" safety rules. Under Chinese regulations, warehouses stocking dangerous materials must be at least one kilometer (0.6 miles) away from surrounding public buildings and main roads, it said, but there were two residential compounds and several main roads within that distance.

Two hospitals, a convention center, several residential compounds and a football pitch were also nearby, it said. "The warehouse should not have passed the environment assessment under normal circumstances," the paper quoted an unnamed environmental expert as saying.

Residents fearing pollution from proposed or already-built industrial plants in China regularly protest about local authorities being prepared to prioritize profits over safety. In Tianjin, taxi driver Li Shiwen, 53, expressed familiar sentiments on Friday. "There shouldn't be reckless development of these type of dangerous chemicals so close to where people live," Li said. "There's always short term thinking in China, looking for a quick solution," he added. "No one thinks about the fact we have to live here for generations."

China's Tianjin port is the 10th largest port in the world by container volume and the seventh largest in China, according to the World Shipping Council, moving more containers than the ports of Rotterdam, Hamburg and Los Angeles. It handles vast quantities of metal ore, coal, steel, cars and crude oil. The overall economic impact of the blast will hinge, in part, on how long the cleanup takes. The government has so far said little about the cause of the blast.

China has seen a string of industrial accidents in recent years. In April, a paraxylene plant in southeastern Fujian province exploded, causing injuries and tremors up to 50 kilometers away. In July, a petrochemical factory in eastern Shandong province exploded, sending a huge fireball into the sky. In 2013, pipelines belonging to China's Sinopec Group exploded in the port city of Qingdao, killing 62. A 2010 pipeline explosion at the northeastern port of Dalian sent up 30-meter flames and spilled at least 1,500 tons of oil into the sea.
Last Update: Aug 14, 2015 4:25 pm
RELATED TOPICS