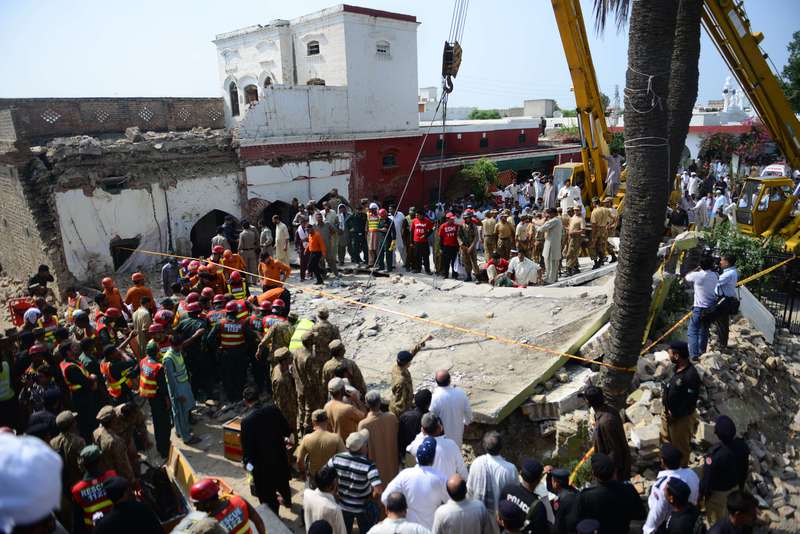 Pakistani rescuers gather at the site of a blast at Shadi Khan village on August 16, 2015. | AFP Photo
by Compiled from Wire Services Aug 16, 2015 12:00 am
Two blasts killed one of Pakistan's provincial ministers and 13 others when it destroyed the minister's home on Sunday in Prime Minister Nawaz Sharif's political heartland, rescue officials said.

A pair of suicide bombers detonated their explosives at the minister's home, killing him and 13 others in eastern Pakistan. A militant group affiliated with the Pakistani Taliban claimed responsibility.

Shuja Khanzada's body was retrieved from the rubble of the collapsed building in his hometown of Shadi Khan in Attock district, some 80 kilometers (50 miles) northwest of the capital, Islamabad, government official Saeed Elahi said.

Police said the blast appeared to be a suicide attack, and it had caused the roof to cave in as the home minister of Punjab province, Shuja Khanzada, held meetings with around 20 people in his hometown of Attock in northern Pakistan.

"There were between 20 and 30 people present when the blast took place," district information officer Shahzad Niaz told Reuters. "The roof collapsed."

Rescue workers at the scene said nine bodies had been recovered so far.

A Taliban-affiliated militant group, Lashkar-e-Islam, claimed responsibility for the attack and said it was retaliation for military operations against them.

"Such types of attacks will continue in the future," Saluddin Ayubi told Reuters.

It was unclear if Lashkar-e-Islam, based mainly in the tribal areas along the Afghan border, had actually carried out the attack or was just taking credit for it.

If the claim was true, the bombing would represent a significant development in the group's ability to strike at high level targets. Such large attacks are more usually the hallmark of the Taliban or banned sectarian group Lashkar-e-Jhangvi.

Pakistan, a nuclear-armed nation of 190 million people, is plagued by a Taliban insurgency, criminal gangs and sectarian violence.

Punjab has traditionally been more peaceful than other parts of Pakistan. Sharif's opponents have accused him of tolerating militancy in return for peace in his province, a charge he hotly denies.

Two weeks ago, Punjab police killed the leader of Lashkar-e-Jhangvi, along with his two sons, deputy, and 10 other supporters.

Police described the incident as a shootout as he sought to escape from custody, but many insiders say the shooting had the hallmarks of an extrajudicial killing.
Last Update: Aug 16, 2015 6:02 pm
RELATED TOPICS