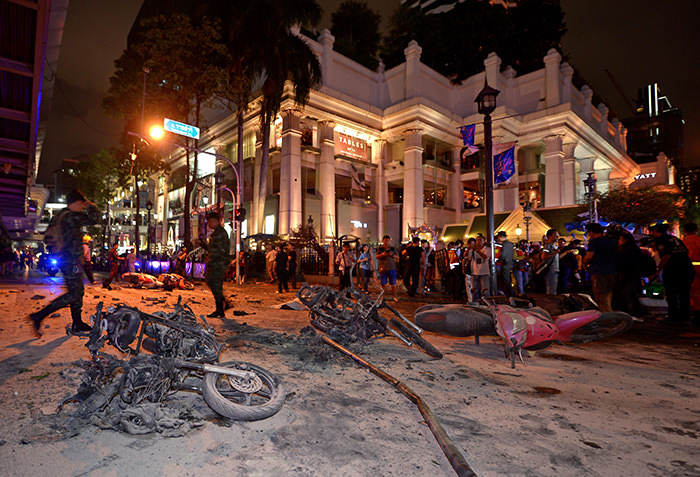 Thai soldiers inspect the scene after a bomb exploded outside a religious shrine in central Bangkok late on August 17, 2015 killing at least 10 people and wounding scores more (AFP Photo)
by Associated Press Aug 17, 2015 12:00 am


A bomb blast rocked a shrine at a major central Bangkok intersection during the evening rush hour Monday, the government said, reportedly killing more than a dozen people and injuring many others.

At least two bombs were found at the scene, said Maj. Gen. Weerachon Sukhondhapatipak, a spokesman for Thailand's ruling junta. He said at least one had detonated.

Thai PBS television said at least 20 people were killed. Weerachon said dozens were injured, and that some foreigners were among the injured.

The explosion took place at the Rajprasong intersection, which was the center of many contentious political demonstrations in recent years. It occurred in front of the Erawan Shrine, a tourist landmark also popular with Thais.

The first bomb was found inside the shrine compound, while the second was found opposite the complex, Weerachon said.

Thailand's capital has been relatively peaceful since a military coup ousted a civilian government in May last year after several months of sometimes violent political protests against the previous government. However, there has been some tension in recent months as the junta has made clear it may not hold elections until 2017 and wants a constitution that will allow some type of emergency rule to take the place of an elected government.

Car bombs are almost unknown in Bangkok, but have been used in southern Thailand, where a Muslim separatist insurgency has been flaring for several years.
Last Update: Aug 18, 2015 12:05 pm
RELATED TOPICS