Second explosion in Bangkok at a ferry pier, with no injuries, a day after deadly bombing 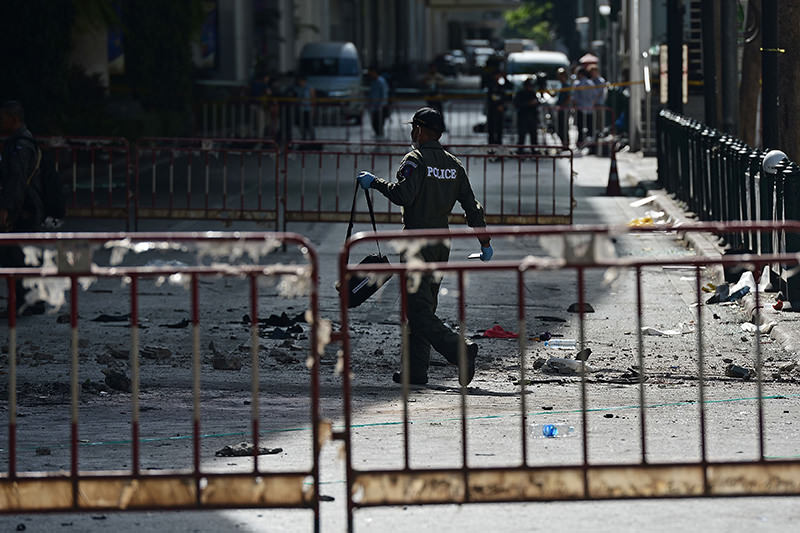 A police officer walks at the cordoned-off site of a bomb blast outside the popular Erawan shrine in the heart of Bangkok's tourist and commercial centre on August 18, 2015 (AFP photo)
by Compiled from Wire Services Aug 18, 2015 12:00 am
A day after Bangkok's deadly bomb attack there has been a second explosion in the capital, this time at a ferry pier, but this time no one was hurt, police say.

Police Senior Sgt. Maj. Worapong Boonthawee says an explosive device was thrown from the Taksin Bridge on Tuesday afternoon and blew up at Sathorn Pier after falling into the Chao Phraya River below. "There is no injury," he says.

Security camera footage shows a sudden blast of water dousing people on a walkway at the pier, as bystanders ran for safety.

Thailand's junta chief on Tuesday said authorities are hunting a "suspect" seen on CCTV footage near the scene of a bombing that claimed at least 20 lives in Bangkok and wounded scores more on Monday night.

"Today there is a suspect who appeared on CCTV but it's not clear... we are looking for this guy," Prime Minister Prayut Chan-O-Cha said.

He also said he believed Facebook messages apparently warning of an imminent danger to Bangkok ahead of the bomb came from an "anti-government group" based in Thailand's northeast -- the heartland of the kingdom's anti-coup Red Shirt movement.

"We are looking for them now, some of them are in Isaan (northeastern Thailand)."

Thai officials have raised the death toll to 20 in Monday night's central Bangkok bombing, and the number injured has risen to 140.

The new numbers come from the Narinthorn emergency medical rescue center, which previously said 18 people had been killed and 117 hurt.