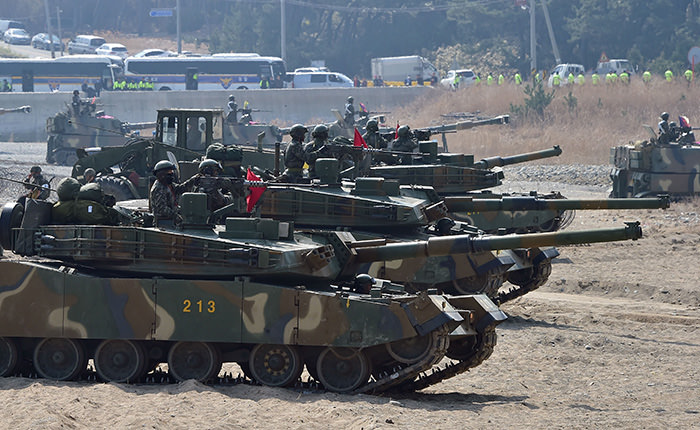 South Korean K-1 tanks take a position on a beach during a joint landing operation by US and South Korean Marines in the southeastern port of Pohang (AFP Photo)
by Associated Press Aug 20, 2015 12:00 am
South Korea's military fired dozens of shells Thursday at rival North Korea after the North lobbed a single artillery round at a South Korean border town, the South's Defense ministry said.

The Defense Ministry said in a statement that it fired at the place where North Korea's fired its shell. There were no other immediate details on any injuries in the South Korean town or in the North, but South Korean media reported that towns on the South Korean side of the world's most heavily armed border were being evacuated.

North Korea had previously threatened to attack South Korean loudspeakers that have been broadcasting, for the first time in 11 years, anti-Pyongyang propaganda messages across their shared border. Pyongyang also restarted its own loudspeakers aimed at the South.

The cross-border propaganda warfare followed accusations from Seoul that Pyongyang had planted land mines on the South Korean side of the Demilitarized Zone that maimed two South Korean soldiers last week.

Authoritarian North Korea is extremely sensitive to any criticism of the government run by leader Kim Jong Un, whose family has run the country since it was founded in 1948.

North Korea's army said previously in a statement that the broadcasts were a declaration of war and that if they were not immediately stopped "an all-out military action of justice" would ensue.

South Korean President Park Geun-hye urged Pyongyang to "wake up" from the delusion that it could maintain its government with provocation and threats.

Pyongyang's powerful National Defense Commission had claimed that Seoul fabricated the evidence on the land mines and demanded video proof. The land mine explosions resulted in one soldier losing both legs and another soldier one leg.
Last Update: Aug 20, 2015 12:17 pm
RELATED TOPICS