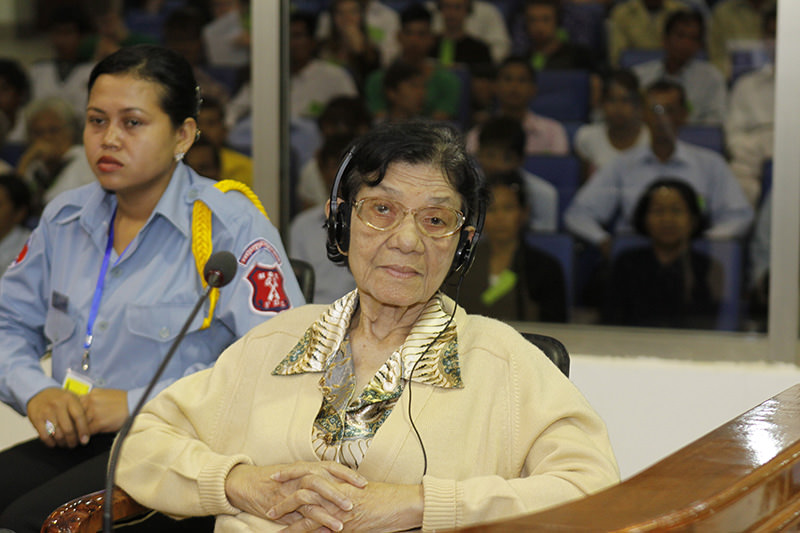 Ieng Thirith was a sister-in-law of the movement's late supreme leader, Pol Pot. A Sorbonne-educated Shakespeare scholar, she served as minister of social affairs and was married to Ieng Sary, the regime's former foreign minister, who died in 2013 at age 87.

Her son, Ieng Vuth, said she had been suffering from dementia, heart troubles and other health problems. He said Buddhist funeral rites would be held at her family's hometown of Pailin in northwestern Cambodia, with a cremation scheduled for Monday.

"I don't have many words to say, but we lost a good mother today," Ieng Vuth said by phone from his home.

Ieng Thirith was one of just a handful of aging Khmer Rouge leaders put on trial by a United Nations-backed tribunal seeking justice for crimes committed by the radical movement.

But in September 2012, the tribunal was forced to free her after she was declared mentally unfit to stand trial because of an illness thought to have been Alzheimer's disease. However, the charges against her were not dropped.

Prosecutors had accused her of involvement in the "planning, direction, coordination and ordering of widespread purges," and charged her with crimes against humanity, genocide, homicide, torture and religious persecution. She denied the charges.

Though two of her high-ranking co-defendants were found guilty last year and sentenced to life in prison, her death highlights concerns that full justice may never be attained because death may overtake the judicial process.

The two Nuon Chea, the regime's chief ideologist and No. 2 leader, and Khieu Samphan, a former head of state are now in a second trial also related to charges of genocide.

Born the second daughter of a Cambodian judge on March 10, 1932, Ieng Thirith came from a relatively wealthy and privileged family and traveled to Paris to study.

She married Ieng Sary in 1951 during her stint in France, where she became the first Cambodian woman to earn a degree in English literature. Her original name was Khieu Thirith.

After returning to Cambodia in 1957, she worked as a professor and founded a private English school in the capital, Phnom Penh.

In the 1960s, she joined an underground circle of Cambodian leftists, and eventually followed her husband into the jungle in 1965, fleeing a harsh bout of government repression.

The following year, she toured Cambodia's northwest to investigate health conditions, which she reported accurately were disastrous. But her conclusion did not blame the government. She told Pol Pot foreign agents were infiltrating their ranks to undermine the revolution, according to the Documentation Center of Cambodia, an independent organization that gathers evidence of Khmer Rouge atrocities.

In response to her report, Pol Pot ordered a purge of Khmer Rouge cadres in the region whom he considered enemies of the revolution, the Documentation Center said. The sweep was one of several bloody episodes reflecting the regime's extreme paranoia.

Between 1975 and 1979, an estimated 1.7 million people in Cambodia died of starvation, exhaustion, lack of medical care or execution.

A U.N.-backed tribunal was established in 2006 to seek justice for crimes committed during the reign of the Khmer Rouge, and Ieng Thirith was arrested in 2007 along with her husband, and charged with crimes against humanity, genocide, homicide, torture and religious persecution.

Ieng Thirith said the charges against her were "100 percent false" and claimed she worked for the benefit of the people.
Last Update: Aug 22, 2015 10:38 pm