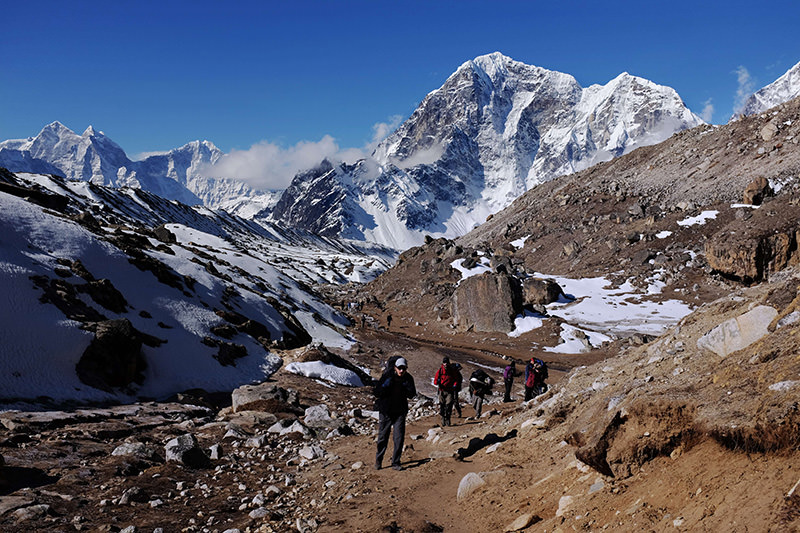 In this photograph taken on April 24, 2015, trekkers and climbers make their way up a trail leading to the village of Gorak Shep and Everest Base Camp (AFP photo).
by Associated Press Aug 23, 2015 12:00 am
Nepal has opened Mount Everest to climbers for the first time since an earthquake-triggered avalanche in April killed 19 mountaineers and ended the popular spring climbing season.

Japanese climber Nobukazu Kuriki will be the first to attempt to scale the world's highest peak since the quake. Nepal's tourism minister, Kripasur Sherpa, gave Kuriki his climbing permit at a ceremony in Kathmandu on Sunday.

Kuriki plans to leave for the mountain on Tuesday by helicopter and then reach the summit in mid-September. The autumn season is considered a difficult time to attempt Everest and is generally avoided by climbers.

"The main purpose of my climb is to spread the message that Nepal was safe for climbers and trekkers even after the earthquake," Kuriki told reporters.

It will be Kuriki's fifth attempt at Everest. His four previous bids to reach the top of the 8,850-meter (29,035-foot) mountain were unsuccessful. In his last attempt, in 2012, he lost nine fingers to frostbite.

Since April's earthquake, which killed nearly 9,000 people, Nepal has been desperate to bring back the tens of thousands of tourists who enjoy trekking the country's mountain trails and climbing its Himalayan peaks.