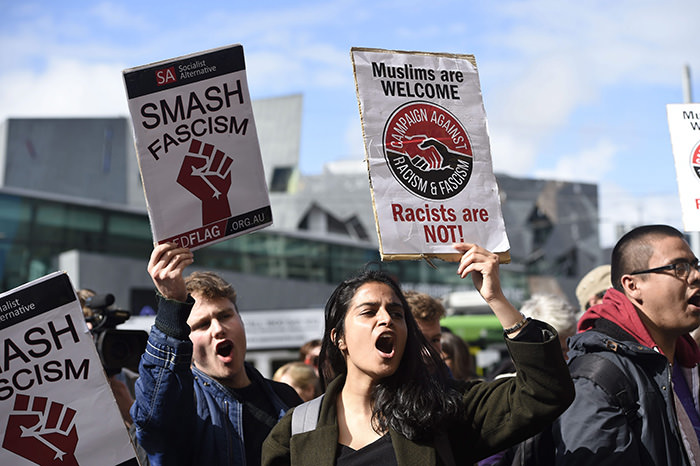 Protesters rally and block traffic outside Flinders Street Station against the Australian Border Force's (ABF) Operation Fortitude in Melbourne, Australia (EPA Photo)
by Aug 28, 2015 12:00 am
A major operation to spot check people's visas on the streets of Melbourne as part of a crime crackdown was cancelled Friday after sparking community outrage that Australia risked becoming "a police state".

The controversy erupted after the Australian Border Force (ABF) released a statement on Friday saying its officers would join police and transport officials at various locations this weekend to speak "with any individual we cross paths with" to identify visa fraudsters.

"You need to be aware of the conditions of your visa; if you commit visa fraud you should know it's only a matter of time before you're caught out," said ABF Regional Commander for Victoria and Tasmania, Don Smith.

The ABF, part of the Immigration Department, said the focus would be on people travelling to, from and around the city "targeting everything from anti-social behaviour to outstanding warrants".

But the news spurred an online storm with users questioning how they would decide who to stop and whether it would target those of foreign appearance.

"Great... so that's that then... Just stop anyone that looks like a migrant and demand their papers," one netizen, Senor Snap, tweeted.

Under the Migration Act, an officer may ask a person they know, or reasonably suspects, is a non-citizen to show their ID, proof of citizenship or visa.

"How will the Border Force distinguish between locals, visitors and visa holders?" he asked reporters.

"Will every person in Melbourne now be asked to show their papers as they move about the city? Or will they only be stopping people with certain skin colours?"

As the backlash grew, the ABF issued a second "clarifying" statement, denying it would stop people at random and that it would only conduct background visa checks on individuals referred by police and other agencies.

"The ABF does not and will not stop people at random in the streets and does not target on the basis of race, religion, or ethnicity," it said.

By then, a crowd of several hundred protesters had shut down a main intersection in the heart of Melbourne, chanting "no to racism, no to hate, this is not a police state".

Victoria Police quickly abandoned the operation after a planned press conference on the operation was cancelled, citing safety issues.

"We understand there has been a high level of community interest and concern which has been taken into consideration when making this decision," police said.

"Victoria Police's priority is the safety and well-being of the whole community and we will continue to work with our partner agencies to achieve this."

"The community was outraged at the prospect of the random visa checks and should remain incensed with the government for thinking such an activity would be acceptable in the first place," he said.
Last Update: Aug 28, 2015 12:16 pm
RELATED TOPICS