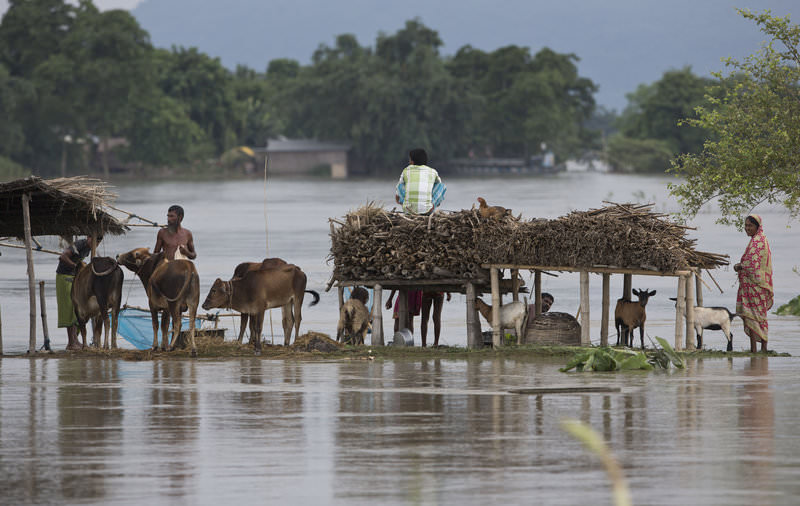 The state's disaster management authority said Tuesday some 50,000 people were sheltering in 168 relief camps across rain-soaked state, with others staying with family or friends.

Most of the flooding was caused when rivers, including the Brahmaputra and its tributaries, overflowed their banks. At least 1,600 villages have been affected, with the worst-hit in Dibrugarh district.

Some of the 21 killed were washed away in rivers, including a mother and son swept downriver in the raging Sessa.

"Thousands of people are living lives of misery. In some cases, people are living with one meal a day" as people struggle to find dry places for cooking or harvesting firewood, Tegu said by telephone from the council headquarters in Gogamukh in Dibrugarh district, adding that the greatest needs were clean drinking water and food. "People are being forced to drink turbid floodwaters."

Many of the 120,000 people living on Majuli Island, the world's largest river island, have taken refuge along with their cattle and poultry in bamboo shelters built on stilts as water gushes across the island below.

Wild animals including elephants, deer, buffalo and some of the 2,500 endangered one-horn rhinos in the Kaziranga National Park have moved to higher ground. Forest rangers are patrolling the swamped park in wooden rowboats, as well as patrolling a highway that borders the 480-square-kilometer park to keep motorists from speeding.

The northeast Indian region, located between Bangladesh and Myanmar, is prone to flooding during the June-to-September annual monsoon season.