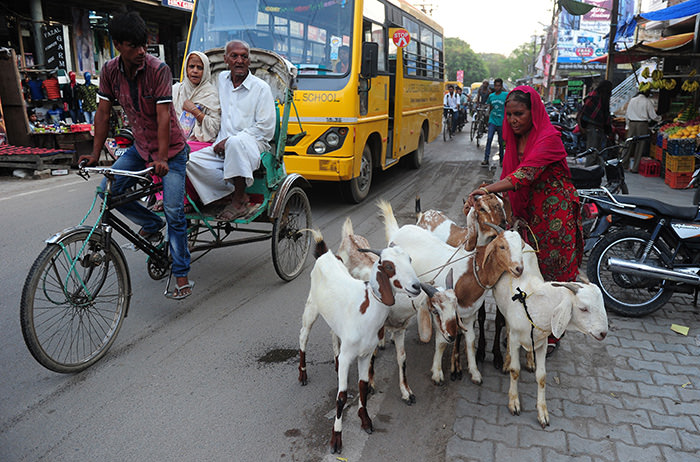 An Indian Muslim woman leads her goats for sale at a market ahead of Eid al-Adha in Allahabad on September 22, 2015 (AFP Photo)
by Anadolu Agency Sep 23, 2015 12:00 am
Khalil Ansari, a 40-year-old small textile trader in the dusty Indian town of Malegaon, says the approach of the Muslim festival Qurban Bayram (Feast of Sacrifice), also known as Eid-ul-Adha, has filled him with worry.

The festival, which marks the climax of the Hajj pilgrimage performed by millions, sees Muslims perform a sacrificial slaughter -- which in India, is usually of cows -- but new laws have changed the ritual for Ansari and other Muslims.

"For the first time in my life, I can't sacrifice bulls," he tells Anadolu Agency before the Muslim festival, being celebrated in India on Friday.

The western state of Maharashtra banned the slaughter of bulls earlier this year when the right-wing nationalist Bharatiya Janata Party (BJP) came to power in October 2014.

A ban on killing cows already existed but had exempted bulls; the BJP expanded the ban and decided to enforce it more strictly, making this coming Qurban festival the first time in Maharashtra's history that Muslims will not sacrifice cows.

Still exempted are water buffalo and Ansari says he will have to reluctantly turn to that option because of the beef ban, which affects 11.5 percent of Maharashtra's population that are Muslim.

"The prices of goats are at an all-time high because of the beef ban in the state," Ansari says, complaining that the government should not dictate what people eat. "India is a secular democracy and the constitution guarantees personal liberty, which includes freedom to choose diet."

The beef ban has not just angered Muslims but also Dalits, who suffer from a lower status in the old caste system, other minorities and poor Hindu farmers who breed cattle.

Muslim politicians have called for a relaxation of the law but without success and the Bombay High Court, the state's top court, rejected petitions this week to ease the law for Qurban Bayram.

"No such temporary relief is possible under the beef ban legislation," Afroze Siddiqui, a lawyer involved in petitioning the high court, tells Anadolu Agency. "There is no provision of temporary relaxation of the ban in the legislation."

"Some politicians are trying to mislead Muslims," Siddiqui says, adding that bulls can only be sacrificed if the high court or India's Supreme Court declare the legislation unconstitutional.

He notes that it will take time for the courts to settle on the sensitive issue.

"Some petitioners are merely challenging the legislation on the basis of what they call the 'right to eat by choice'," Siddiqui says, adding that others contest the constitutionality of the entire legislation.

There is no federal law forbidding cow-slaughter in India, but most Indian states have state laws prohibiting the practice. Some religious Hindus, for whom cows are sacred, are opposed to the slaughter of the animals.

The neighboring state of Goa has refused to impose the ban and some other parts of India have eased the restriction for Qurban. The most controversial imposition has been in Jammu & Kashmir, the disputed region that is the only Muslim-majority state in India, which was this month given a high court order to strictly enforce an existing ban.

The textile town, where 100 bulls used to be slaughtered every day before the ban, is coming to terms with the new reality. The most obvious alternative is water buffalo, which make up a quarter of meat sold as beef in the state, but its meat is not popular.

"We don't have any other choice except to sell the buffalo," Saleem Shaikh, a seasonal cattle trader in Malegaon, told Anadolu Agency.