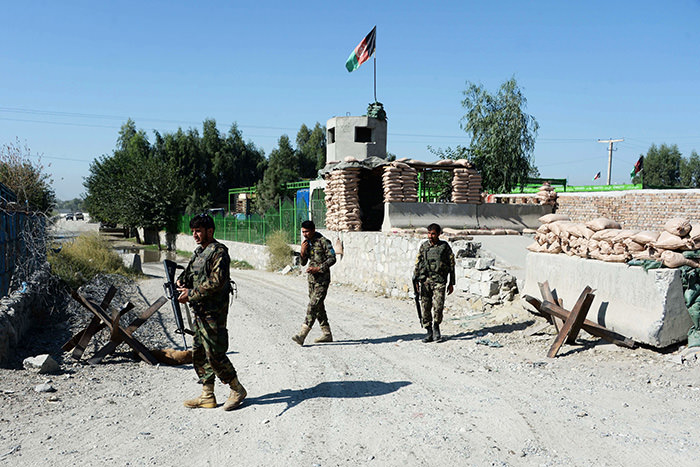 Afghan security personnel walk outside Jalalabad Airport where a US C-130 military transport plane crashed in Jalalabad on October 2, 2015 (AFP Photo)
by Oct 02, 2015 12:00 am
A United States military transport plane crashed at an airfield in Afghanistan shortly after midnight on Friday , killing all 11 people on board, the U.S. military said, describing the crash as an accident.

The cause of the crash at Jalalabad airfield was under investigation, a spokesman said, refusing to rule out the possibility that there may be dead or wounded on the ground.

First respondents were on the scene, he said.

Six U.S. military service members and five civilian contractors who were employed by the U.S.-led international force in Afghanistan were killed in the crash.

A spokesman for the Taliban militant movement seeking to topple the government said its fighters had shot down the aircraft, but the U.S. military said there were no reports of enemy fire at the time.

A statement from the 455th Air Expeditionary Wing at Bagram Airfield described it as "an accident," without offering details.

The crash came hours after Afghan troops recaptured the center of the strategic northern city of Kunduz on Thursday amid fierce clashes with Taliban militants, three days after losing the provincial capital.

The Taliban have been fighting to regain power since being toppled by a U.S.-led intervention in 2001.

The number of U.S. deaths in Afghanistan has fallen sharply after the United States wrapped up its formal combat mission last year, although U.S. special forces and U.S. airstrikes were involved in this week's counter-offensive in Kunduz.

In 2011, Taliban militants shot down a U.S. military Chinook helicopter, killing all 38 people on board.

Taliban spokesman Zabihullah Mujahid said on Twitter that its fighters shot down the plane, saying "15 invaders and a number of slave soldiers were killed".

The insurgents typically claim responsibility for any coalition air crash.