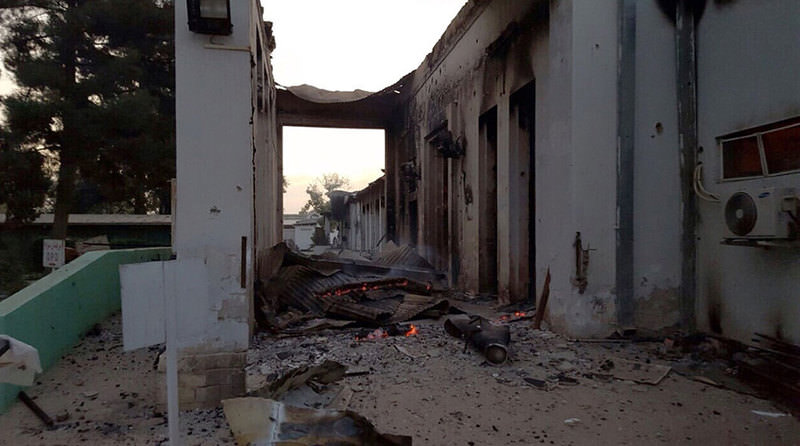 by Compiled from Wire Services
Oct 03, 2015 12:00 am
A suspected US air strike on a hospital in the Afghan city of Kunduz Saturday killed 22 people, medical charity MSF said, claiming the facility was repeatedly bombarded for more than 30 minutes after Washington was informed.

Dozens more were seriously wounded at the facility, a key medical lifeline that has been running "beyond capacity" during fighting that saw the Taliban seize control of the northern provincial capital for several days.

The strike early Saturday left the building engulfed in flames, with photos posted by Doctors Without Borders showing their staff shocked and dazed.

"At 2:10 am (2040 GMT) local time... the MSF trauma center in Kunduz was hit several times during sustained bombing and was very badly damaged," the organization, known by its French initials, said.

It said the bombing continued for more than 30 minutes after American and Afghan military officials were first alerted they were being hit.
"All parties to the conflict, including in Kabul and Washington, were clearly informed of the precise location (GPS coordinates) of the MSF facilities," the statement added.

The Afghan defense ministry expressed sadness but in a statement said "a group of terrorists armed with light and heavy weapon... were using the hospital building as a position to target Afghan forces and civilians".

NATO conceded US forces may have been behind the strike but has not so far commented on the specific claims of MSF, which has long treated the war-wounded from all sides of the conflict.

"US forces conducted an air strike in Kunduz city at 2:15 am (local time)... against individuals threatening the force," a NATO statement said.
"The strike may have resulted in collateral damage to a nearby medical facility. This incident is under investigation."

MSF on Sunday demanded that an independent international body investigate the air strike, saying the group could not rely on a U.S. military probe that has been launched into the destruction of the hospital.

"Under the clear presumption that a war crime has been committed, MSF demands that a full and transparent investigation into the event be conducted by an independent international body," MSF General Director Christopher Stokes said in a statement.

The incident could renew concerns about civilian casualties caused by US air strikes, a deeply contentious issue in the 14-year campaign against Taliban insurgents.

Saturday's bombing came after Taliban insurgents overran the northern Afghan city on Monday. It was the first major city to be captured by militants since 2001.

MSF said some 105 patients and their caregivers, as well as more than 80 international and local MSF staff, were in the hospital at the time of the bombing.

The blackened building was filled with the smell of burning flesh and some bodies were charred beyond recognition, said Qiamudeen, a 31-year-old shopkeeper whose neighbor was killed in the strike.

"I was shocked, emotional and in tears when I reached the hospital," Qiamudeen, who goes by one name, told AFP.

Another resident said he was anxiously trying to contact six friends, all doctors and nurses at MSF.

"I don't have any news from them and they may have been killed," he told AFP.

He said many people were too afraid to leave their homes to check on wounded relatives because of sporadic firefights between troops and Taliban militants.

The Afghan government insists the city is firmly in their control.

The MSF trauma center in Kunduz is the only medical facility in the whole northeastern region of Afghanistan that can deal with major injuries.

"We are deeply shocked by the attack, the killing of our staff... and the heavy toll it has inflicted on healthcare in Kunduz," MSF director of operations Bart Janssens said.

"We urge all parties to respect the safety of health facilities and staff."

Amnesty International condemned the "deplorable loss of life", calling for an urgent and impartial investigation.

The International Committee of the Red Cross said the strike was "an appalling tragedy".

"Such attacks against health workers and facilities undermine the capacity of humanitarian organizations to assist the Afghan people at a time when they most urgently need it."

Kunduz is facing a humanitarian crisis, with thousands of civilians caught in the crossfire between government forces and insurgents. At least 60 people are known to have died and 400 wounded in recent fighting.

The Taliban's offensive in Kunduz, their biggest tactical success since 2001, marks a major blow for Afghanistan's Western-trained forces.

In a statement, the Taliban accused "barbaric American forces" of deliberately carrying out Saturday's strike, which "killed and wounded tens of doctors, nurses and patients".