Taliban captures and loses Kunduz, claims to have shot down US plane 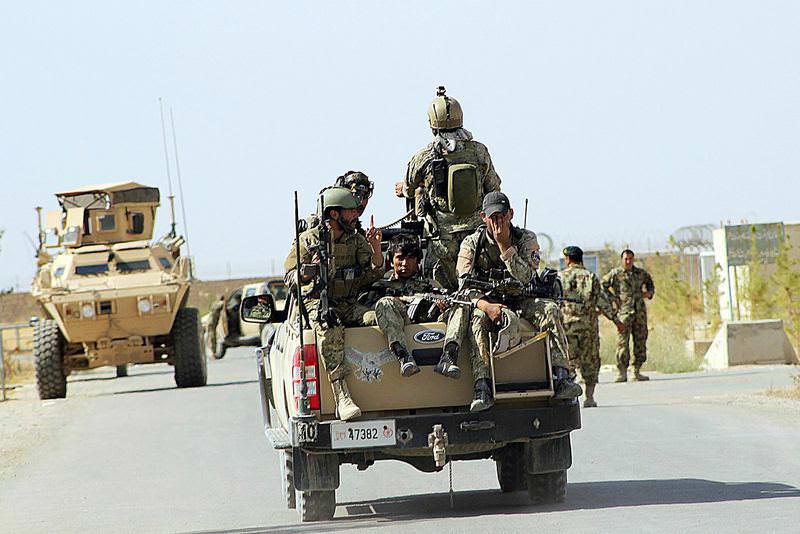 Afghan National Army soldiers conducting an operation, outside of Kunduz.
by Compiled from Wire Services Oct 03, 2015 12:00 am

The Taliban operations are becoming more effective in Afghanistan, and the insurgents captured the city of Kunduz but government troops seized the control again. Taliban also claimed it shot down a U.S. military plane while White House said it was an accident

Taliban fighters were holding out against Afghan troops in Kunduz on Friday, a day after government forces recaptured most of the northern city that had fallen to the militants in their biggest victory of a 14-year insurgency. In Jalalabad in the east of the country, a U.S. military transport plane crashed at an airfield just after midnight, killing all 11 people on board, the U.S. military said. The Taliban said it had shot down the aircraft, but the U.S. military, which still has thousands of troops in Afghanistan after NATO's combat mission ended, said there were no reports of enemy fire and described the crash as an accident.

In Badakhsan province in Afghanistan's northeast, the Taliban took control of Warduj district late on Thursday after heavy fighting, according to Nawid Forotan, a spokesman for the provincial governor. Residents in Kunduz, a strategic city of 300,000 that fell to the Taliban in a stunning pre-dawn attack on Monday, said that while most Taliban fighters had fled, some were holed up in civilian homes fighting the army.

The Taliban have been accused of extrajudicial killings, raping, torturing, looting and setting fire to government buildings during their three-day occupation of Kunduz, the Afghan president's office said in a statement on Friday. "Afghanistan is committed to legally prosecute the perpetrators of these crimes, and to that end, assigns a civilian commission to assess the losses sustained as a result of the Taliban presence," the statement said. At least 60 people have been killed in the fighting as of Friday, according to a Health Ministry spokesman. He said hospitals in Kunduz had treated about 466 wounded. Ahmad Sahil, a producer for local Afghan television in the city, said many people were still too afraid to leave their houses. "The Taliban who knew Kunduz left the city already, but many foreign fighters could not flee and are hiding in people's homes in some parts of the city centre and are still resisting," Sahil said on Friday. Hamdullah Danishi, acting governor of Kunduz province, described the capital as calm, and said there was "no major fighting". He acknowledged, however, that the insurgents had not been completely driven from Kunduz. "Taliban are still in civilian houses and buildings," Danishi said. "They are using civilians as human shields."

The International Committee of the Red Cross said it was increasingly concerned about the welfare of citizens inside the city and the lack of medical supplies and personnel. "We are very short-staffed in the hospitals," said Peter Esmith Ewoi, an ICRC doctor working in the city. "The medical staff in the city cannot get to the hospitals because of the on-going fighting." The ICRC said it has emergency medical supplies ready to be flown in as soon as security at Kunduz airport improves. In a worrying sign for government forces struggling to contain a growing militant threat, the Taliban made territorial gains elsewhere in the country, although on a smaller scale than the brief seizure of Kunduz. "Our forces did not get reinforcements on time," Forotan said of the loss of Warduj district in Badakhshan. "Taliban were in big numbers, therefore our forces retreated." Taliban spokesman Zabihullah Mujahid said militants killed 50 soldiers and gained control of 28 check posts in a district of Badakhshan province that has been fought over for years.

It occupies a strategic position along a highway to the border with Tajikistan and also shares a border with China and Pakistan. The attack started when Taliban militants raided checkpoints in several villages, overrunning reinforcements and seizing control late in the afternoon, according to a government report. The police headquarters in Warduj fell at around 6 p.m. it said. At least two police were killed in the battle, while three others were reported missing.

The new leader of the Afghan Taliban said on Friday that the capture of the northern city of Kunduz was a "symbolic victory" that showed the strength of the insurgency even though the Taliban pulled out of the city after three days. Still, the three-day occupation of Kunduz was "a historic event," which was "celebrated by the ordinary people of the city," claimed Mullah Akhtar Mansoor. Mansoor, who spoke to The Associated Press by telephone from an unknown location, was appointed the Taliban leader in August, after revelations that the group's founder, Mullah Muhammad Omar, had died more than two years ago. At the same time, it was a humbling defeat for Afghan President Ashraf Ghani and raised questions over whether the U.S.-trained military was capable of defending the country now that most coalition forces have withdrawn. "The victory is a symbolic victory for us, and moreover, it is also a historical event which will be remembered," Mansoor said. "People who said we were a small force with an unchosen leader can now see how wrong they were about the potential and strength my people have."

Mansoor said the success of the movement in taking the city in a surprise attack had also allegedly countered Afghan government propaganda, "which said that the people of Afghanistan are against the Taliban and want to rid them from their country." Kandahar's seizure has rattled many in Afghanistan, concerned that the Taliban's expanding footprint across the country could mean they are gearing for a more intense war with Afghan troops. Before this year's summer fighting season began, Afghanistan's northern region was not known for a strong Taliban presence, unlike the country's south and east. The capture of the city has also seriously tarnished Ghani's reputation, according to political analyst Haroun Mir. "We now have the very bad but distinct impression that victory is with the Taliban. It wouldn't have mattered how long they held the city even one hour would have been enough for them," Mir said.

Despite the fact that the Afghan Taliban's swift takeover of northern Kunduz city, considered Afghanistan's gateway to Tajikistan, lasted only for two days, the deadly episode has exposed the vulnerabilities of Afghan forces and the vision of its political leadership, analysts say. Aminullah Habibi, an Afghan security analyst, told Anadolu Agency that the Kunduz debacle was more of a political defeat than a military one. "There was a clear lack of coordination and command there [in Kunduz]; the government in Kabul and the one in Kunduz seemed to have terribly lost the political will to deal with growing militancy in the north, which ultimately resulted in this disgrace," Habibi said. The militant group's victory in Kunduz, though only for two days, must have given the desperate new Taliban supreme leader, Mullah Akhtar Mansoor, a much needed clout over his fighters amid a crisis of leadership following the death of ex-honcho Mullah Omar, Habibi said.

Moreover, since the Kunduz attack began, Taliban's propaganda machine has been in full swing with a number of their spokesmen continuously issuing victory statements to the local media and updating their social media pages with visuals from the frontline. On the media front, the Kabul government remained on the back foot during the first two days, Tuesday and Wednesday. On Thursday, Ghani spoke to the media with relative confidence and vowed to ensure the writ of the government in each and every corner of the country. Before overrunning the provincial capital, the Taliban made similar moves into the far away districts like Imam Sahib, Qala-e-Zaal and Dasht-e-Archi. Habibi argued that it was hard to believe that the government did not see the offensive coming.

Two months ago, Vice President Abdul Rasheed Dostum announced that the militants were using Kunduz province as their command-and-control center in the north of the country. Dostum, who remained on the frontline in neighboring Faryab and Badghis provinces for weeks, said that Kunduz was the militant group's center where a number of foreign militants, including Uzbekistanis, Chechens and Pakistanis were allegedly present and planning major attacks.

Although Kunduz is known to be a Pashtun-majority population, it is surrounded by provinces with a majority of Tajik and Uzbek populations; also ethnic Tajiks associated with former warlords and militia commanders have been in power here since the fall of the Taliban in November 2001. Aashiqullah Yaqoob, a senior journalist and political analyst, said that the people of Kunduz, particularly the Pashtun population had serious grievances, which might fuel rebellion against the government. "There is no denial about the existence of militancy in Afghanistan but tracing back its roots you would see it started during the anti-Soviet resistance in the 1980s, and in the case of Kunduz, a segment of the society has been victimized by local commanders for years; they have been killed, their property seized and even women abducted; such things ultimately benefit the enemies of the nation," he said.
RELATED TOPICS