Hundreds of anti-Islam protestestors clash with counter protestors in Australia 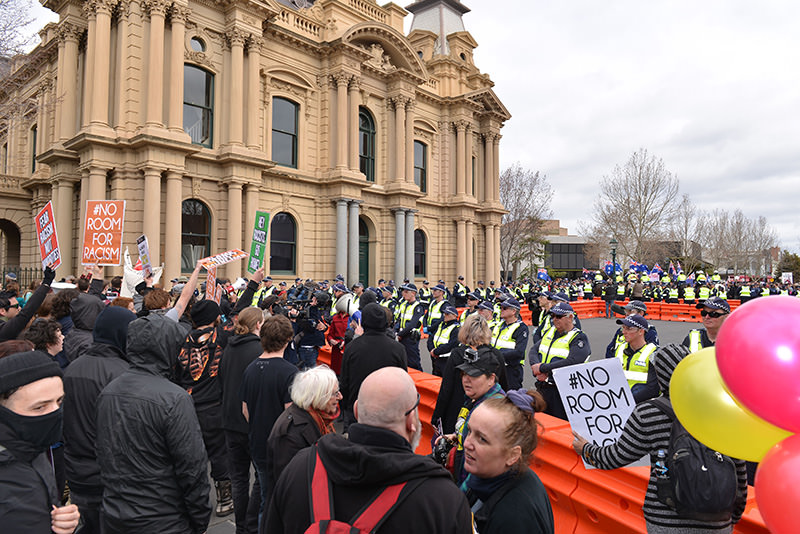 | AA Photo
by Oct 10, 2015 12:00 am
Scuffles broke out as hundreds of rival demonstrators faced off over a plan to build the first mosque in an Australian country town Saturday.

About 300 people organized by the right-wing United Patriots Front came to the normally quiet and picturesque town of Bendigo, 153 kilometres north of Melbourne, to protest against the proposed mosque.

They faced a slightly larger crowd of anti-racists called the Rally for Diversity, and a large police contingent.

"You can either be a Muslim or an Australian, you can't be both," Patriots organiser Blair Cottrell told the anti-mosque rally, according to The Age newspaper.

"We will grow. We will blossom. The only way to stop us to kill us," he said.

The anti-racist group chanted: "Muslims are welcome, racists are not."

Scuffles broke out when a Patriot tried to walk through the Diversity crowd filming everybody, and he had to be pulled out by police.

Bendigo town council approved the mosque over opposition from some local residents.

Similar anti-Islam rallies in other cities flopped for lack of numbers.

A rally in Sydney Friday drew just 20 Patriot protesters outside the mosque where radicalised 15-year-old Farhad Jabar prayed before murdering a police department employee on October 2.

Prime Minister Malcolm Turnbull said Saturday that Australians of all backgrounds should be free to express their beliefs, but not preach hatred and do no harm.

He has called an urgent meeting of security chiefs next week to discuss measures to counter extremist violence such as the October 2 attack, which he called an act of terrorism.