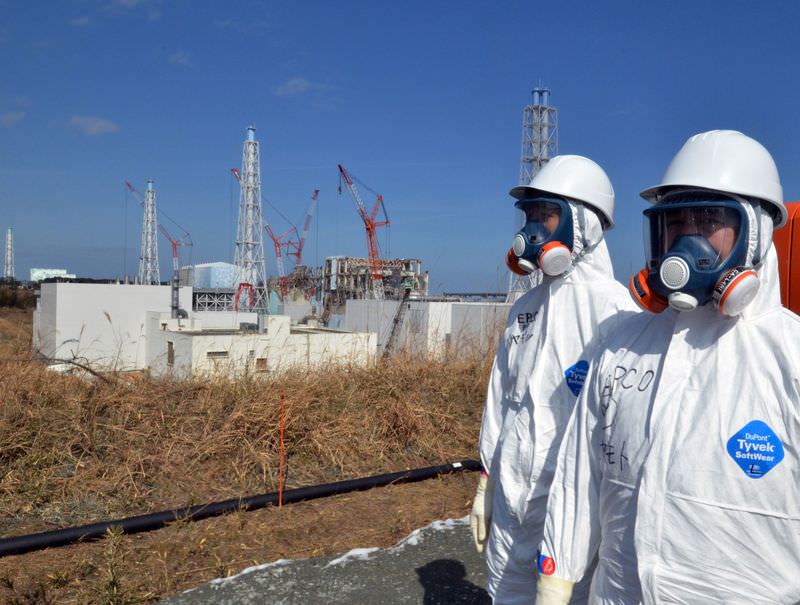 This file picture taken on February 28, 2012 shows Tokyo Electric Power Co (TEPCO) workers standing before the stricken Fukushima Dai-ichi nuclear power plant at Okuma town in Fukushima prefecture, northern Japan. (AFP Photo)
by reuters
Oct 20, 2015 12:00 am
Japan on Tuesday acknowledged the first possible casualty from radiation at the wrecked Fukushima nuclear power plant, a worker who was diagnosed with cancer after the crisis broke out in 2011.

The health ministry's recognition of radiation as a possible cause may set back efforts to recover from the disaster, as the government and the nuclear industry have been at pains to say that the health effects from radiation have been minimal.

It may also add to compensation payments that had reached more than 7 trillion yen ($59 billion) by July this year.

More than 160,000 people were forced from their homes after the meltdowns at the Fukushima Daiichi plant following an earthquake and tsunami in March 2011, the worst nuclear disaster since Chernobyl 25 years earlier.

Hundreds of deaths have been attributed to the chaos of evacuations during the crisis and because of the hardship and mental trauma refugees have experienced since then, but the government had said that radiation was not a cause.

The male worker in his 30s, who was employed by a construction contractor, worked at Tokyo Electric Power Co's Fukushima Daiichi plant and other nuclear facilities, a health ministry official said.

Of total radiation exposure of 19.8 millisieverts (mSv), the worker received a dose of 15.7 (mSv) between October 2012 and December 2013 working at Fukushima, said the official.

While the exposure amount was lower than the annual 50 mSv limit for nuclear industry workers, the government had decided it cannot be ruled out that the worker's leukaemia was a result of radiation, the official said.

Tokyo Electric is also facing a string of legal cases seeking compensation over the disaster.

Inside the plant, Tepco has struggled to bring the situation under control. It is estimated removing the melted fuel from the wrecked reactors and cleaning up the site will cost tens of billions of dollars and take decades to complete.
Last Update: Oct 20, 2015 9:50 pm