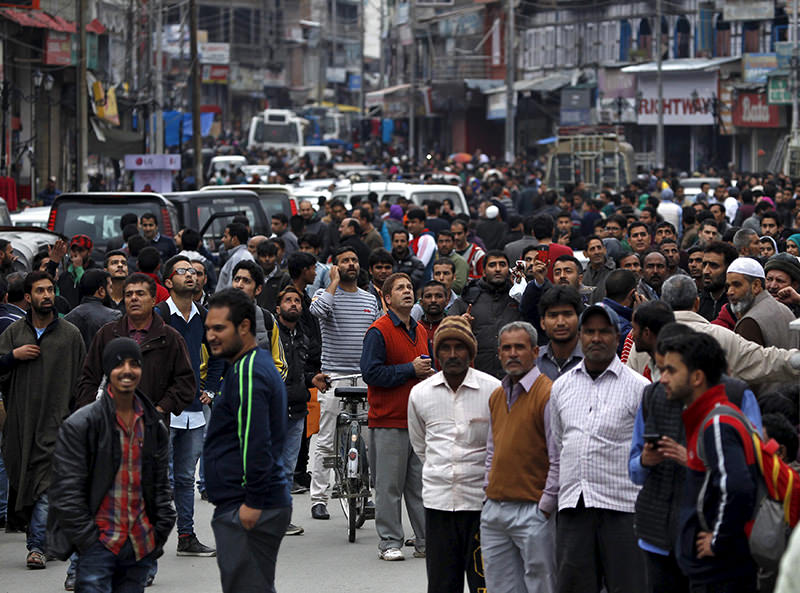 People stand on a road after vacating buildings following an earthquake in Srinagar October 26, 2015 (REUTERS photo)
by Daily Sabah with Wires Oct 26, 2015 12:00 am

A powerful 7.5 magnitude killed at least 260 people as it rocked south Asia Monday, including 12 Afghan girls who were crushed to death in a stampede as they tried to flee their collapsing school. Thousands of frightened people rushed into the streets across Afghanistan, Pakistan and India as the quake was felt across a swathe of the subcontinent.

A tally from local and provincial authorities in Pakistan reported that at least 600 others were wounded across the country, while at least 33 were confirmed dead and more than 200 wounded in Afghanistan.

The quake was centered near Jurm in northeast Afghanistan, 250 kilometers from the capital Kabul and at a depth of 213.5 kilometers, the U.S. Geological Survey (USGS) said.

The epicenter is just a few hundred kilometers from the site of a 7.6 magnitude quake that struck in October 2005, killing more than 75,000 people and displacing some 3.5 million more, although that quake was much shallower.

The death toll rose rapidly amid reports of buildings reduced to rubble, with Pakistan heavily hit. Horrifying news emerged of at least 12 schoolgirls being trampled to death in the northern Afghan province. "The students rushed to escape the school building in Taluqan city (capital of Takhar), triggering a stampede," Takhar education department chief Enayat Naweed told AFP. "Twelve students, all minors, were killed and 35 others were injured." Separately, in Nangarhar province, bordering Pakistan, Six people were killed and 69 others were injured, Najeeb Kamawal, head of the local public hospital told AFP.

At least 28 people were known to have died in Pakistan's northern tribal areas, 20 in the northwest, three in Gilgit-Baltistan and one in Pakistani Kashmir, various officials told AFP. Eight children were known to be among the dead in Pakistan.

Yesterday's quake, which lasted at least one minute, shook buildings in Kabul, Islamabad and New Delhi. At least one aftershock hit shortly afterwards, with the USGS putting its magnitude at 4.8. In a statistical prediction on its website, the agency said there was a one-third chance of the number of fatalities climbing to between 100 and 1,000 people, with several million dollars' worth of damage likely caused. Arbab Muhammad Asim, district mayor for Pakistan's northwestern city of Peshawar, said more than 100 people had been injured there alone. "Many houses and buildings have collapsed in the city," he said. Dr Muhammad Sadiq, the head of emergency services at a government hospital in Peshawar, confirmed the number of injuries. "Many more injured are still coming to hospital. Many are still under rubble," Sadiq told AFP.

Afghanistan's CEO Abdullah Abdullah said reports of damage and injuries were coming in from the nation's northeast. "Disaster authorities to meet within the hour and respond to the needs," he tweeted. Traffic came to a stop in downtown Kabul, with frightened people getting out of their cars as they waited for the quake to pass.

As buildings shook throughout north India, hundreds of people poured onto the streets from office blocks, hospitals and homes, AFP reporters and TV footage showed. Delhi's metro ground to a halt during the tremor although the airport continued operating. "All of around 190 trains plying on the tracks were stopped at the time of the earthquake. The lines and the trains are now being restored after a basic inspection of the respective lines," Anuj Dayal, Delhi Metro spokesman told AFP.

Indian Prime Minister Narendra Modi took to Twitter immediately after the quake. "Heard about strong earthquake in Afghanistan-Pakistan region whose tremors have been felt in parts of India. I pray for everyone's safety," he wrote. "I have asked for an urgent assessment and we stand ready for assistance where required, including Afghanistan & Pakistan."

Afghanistan is frequently hit by earthquakes, especially in the Hindu Kush mountain range, which lies near the junction of the Eurasian and Indian tectonic plates. South Asia's quakes occur along a major fault line between two tectonic plates - one which bears India pushing north and east at a rate of about two centimeters per year against the other, which carries Europe and Asia.

In Nepal, twin quakes in May killed more than 8,900 people, triggered landslides and destroyed half a million homes, leaving thousands in need of food, clean water and shelter.