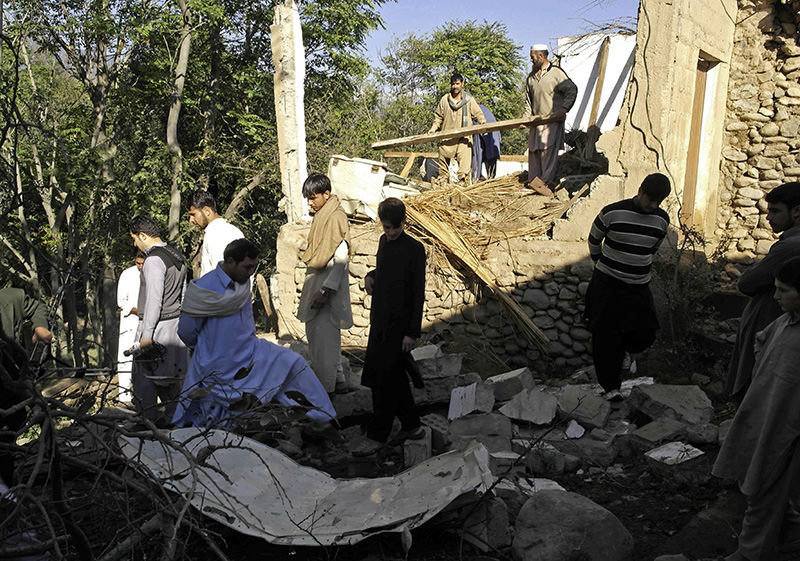 Pakistani residents gather among the rubble of houses following an earthquake in Lower Dir on October 27, 2015 (AFP Photo)
by Daily Sabah with Agencies Oct 27, 2015 12:00 am
The combined death toll has increased to 311 as the rescuers were struggling to reach quake-stricken regions in Pakistan and Afghanistan on Tuesday as officials said.

According to Afghan and Pakistani officials, 237 people died in Pakistan and 74 in Afghanistan in the magnitude-7.5 quake, which was centered deep beneath the Hindu Kush mountains in Afghanistan's sparsely populated Badakhshan province that borders Pakistan, Tajikistan and China.

Afghan authorities were struggling to reach the hardest-hit areas near the epicenter, located 73 kilometers (45 miles) south of Fayzabad, the capital of Badakhshan province.

In Pakistan, the Swat Valley and areas around the Dir, Malakand and Shangla towns in the mountains of Khyber Pakhtunkhwa province were also hard-hit in the quake. The Pakistani town closest to the epicenter is Chitral while on the Afghan side it is the Jurm district of Badakhshan.

In Afghanistan, Ismail Kawusi, spokesman for the Public Health Ministry said the numbers gathered so far from hospitals in various provinces recorded 457 injured. Earlier, Wais Ahmad Barmak, the Afghan minister for disaster management, said 74 people were dead and 266 had been injured.

Badakhshan's Governor Shah Waliullah Adeeb said that in all, 13 districts in the province had been affected, with more than 1,500 houses either destroyed or partially destroyed.

In his province alone, casualty figures of 11 dead and 25 injured "will rise by the end of the day, once the survey teams get to the remote areas and villages," Adeeb said.

Helicopters were needed to reach the most remote villages, many inaccessible by road at the best of times, he added. Now, landslides and falling rocks have blocked the few existing roads. Food and other essentials were ready to go, he said, but "getting there is not easy."

Badakhshan is one of the poorest regions of Afghanistan, despite vast mineral deposits. It is often hit by earthquakes, but casualty figures are usually low because it is so sparsely populated, with fewer than 1 million people spread across its vast mountains and valleys. It also suffers from floods, snowstorms and mudslides.

The casualties and the extent of damage were still being assessed, said Ahmad Kamal, the spokesman for Pakistan's National Disaster Management Authority. Bajur tribal region bordering Afghanistan was also affected by the quake, with dozens of homes damaged in other tribal regions.

The landslides were also hampering rescue attempts in some areas, and roads were being cleared to ease access. The military was also distributing food and blankets to people in remote and inaccessible northwestern and northern region, where most casualties and damage were reported, Bajwa said in a statement.

Pakistan's Prime Minister Nawaz Sharif was expected to visit the earthquake-hit areas later Tuesday, after returning from an official visit in the United States.

Monday's quake shook buildings in the capital, Islamabad, and elsewhere in Pakistan and Afghanistan early Monday afternoon for up to 45 seconds, creating cracks in walls and shutting down power.

In Afghanistan's Takhar province, 12 students at a girls' school were killed in a stampede as they fled a shaking building.

Sonatullah Taimor, a spokesman for the governor of Takhar province, said so far authorities had recorded 14 people dead there including the schoolgirls. More than 50 were injured and 200 houses were destroyed. He said food, blankets and tents were in short supply, though people had been warned to sleep outside in near-freezing temperatures in case of aftershocks.

The United States offered emergency shelters and relief supply kits stored in warehouses throughout Afghanistan that could be used. White House spokesman Josh Earnest said the U.S. government has been in touch with officials in Afghanistan and Pakistan and is ready to provide any additional support.

Pakistan has said it will not issue any appeals to the international community for help as the country has the required resources to carry out the rescue and relief work.

Afghanistan is frequently hit by earthquakes, especially in the Hindu Kush mountain range, which lies near the junction of the Eurasian and Indian tectonic plates. South Asia's quakes occur along a major fault line between two tectonic plates - one which bears India pushing north and east at a rate of about two centimeters per year against the other, which carries Europe and Asia.

A magnitude-7.6 quake hit Pakistan on Oct. 8, 2005, killing more than 80,000 people and leaving more than 3 million homeless, most of them in the northwest of the country and in the divided region of Kashmir.

That quake was much shallower than Monday's 10 kilometers (6 miles) below the surface, compared to the depth of 213 kilometers (130 miles) on Monday and thus caused greater damage, said Mohammad Hanif, an official at the Meteorological Department.