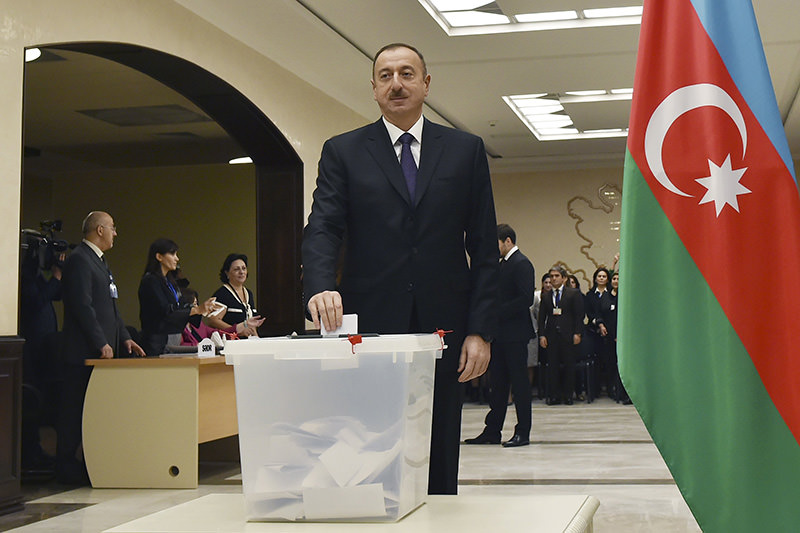 by reuters
Nov 02, 2015 12:00 am
Azerbaijan's President, Ilham Aliyev, maintained his grip on power in the oil-producing nation after loyalists won most parliamentary seats in an election on Sunday, but the opposition cried foul and observers saw democratic shortcomings.

The ruling Yeni Azerbaijan (New Azerbaijan) Party took 69 of the 125 seats in the single-chamber parliament, central election authorities said, while a host of small parties and independents also loyal to the government took most of the rest. The party had obtained 72 seats in 2010 elections.

Aliyev has consolidated his power in the ex-Soviet republic since taking over from his father, Heydar, in 2003, benefiting from revenues from rising oil and gas exports which have delivered improved living standards.

But rights groups accuse the government of curbing freedoms of expression, while the opposition complains of harassment, a lack of access to broadcasting, and draconian restrictions on campaigning.

A 28-member delegation from the Council of Europe's parliamentary assembly (PACE), among about 2,000 foreign observers who monitored the poll, said the election generally met international standards although some observers disagreed.

"The voting process was observed to be adequate and generally in line with international standards," the PACE mission said in a statement. Despite some shortcomings the results expressed the will of the people, it said.

However, it called on the Azeri authorities to "urgently improve the situation on human rights and to continue the democratic development of the country after the elections".

Three members of the mission, in a separate statement, said however that they could not "regard these elections as a step towards free, fair and democratic elections".

"According to preliminary estimates, Yeni Azerbaijan got 69 mandates, which allows us to announce this party as the winner," Mazahir Panakhov, head of the central election commission, told reporters.

The Organisation for Security and Cooperation in Europe (OSCE), Europe's main election watchdog, did not monitor the poll because as it said restrictions imposed on it by the authorities made credible monitoring impossible.

The government denies accusations of wrongdoing and the commission said it had no complaints of serious violations during the poll.

A mainly Muslim country of about 9 million people between Iran, Russia and Turkey, Azerbaijan is host to oil majors including BP, Exxon Mobil and Chevron.

Two major opposition parties said on Monday the election did not express people's free will, alleging violations including ballot stuffing.

"The Musavat party doesn't recognize the results of the Nov. 1 parliamentary elections (which was) conducted in an undemocratic environment," the party said in a statement.

"The parliamentary elections were totally falsified and cannot be regarded as legitimate," the Democratic Forces National Council said in a statement.

Some foreign journalists, including reporters from Reuters, were not given accreditation to cover the election. The foreign ministry cited technical difficulties.
Last Update: Nov 02, 2015 3:36 pm