Suspect that someone you know is a spy? Simply dial China’s new ‘hotline’! 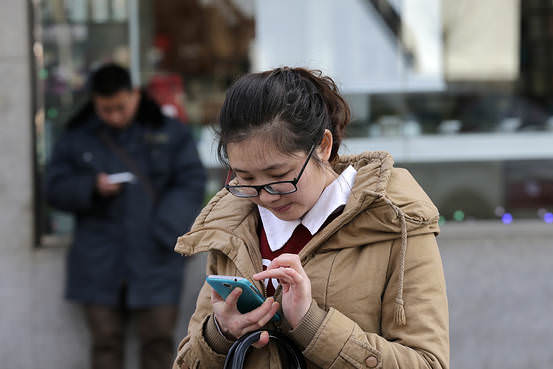 Chinese people use their smartphones on a street in Beijing Monday, Feb. 16, 2015. (Associated Press)
by Anadolu Agency
Nov 02, 2015 12:00 am
Chinese security authorities are reported to have set up a phone hotline for concerned citizens to report on those suspected of conducting espionage.

The Global Times reported Monday that Northeast China's Jilin Province has launched the counter-espionage line, targeting foreign organizations and individuals who conduct activities or who instigate and sponsor others in conducting them.

"Jilin Province is an important place for safeguarding China's national security because the north-eastern region is an industrial and military base. The hot line will help the local government combat spying," Song Zhongping, a Beijing-based military expert, was quoted as saying.

Song Zhongping, a Beijing-based military expert, told the Times that espionage activities aimed at the country have increased significantly during the past few years.

"Spying has permeated not only military affairs, but also economic and political targets," he is reported as saying.

"China is entering a crucial period. Many foreign countries are eager to get inside information about national strategies, with others sabotaging the country's development."
Last Update: Nov 02, 2015 7:26 pm