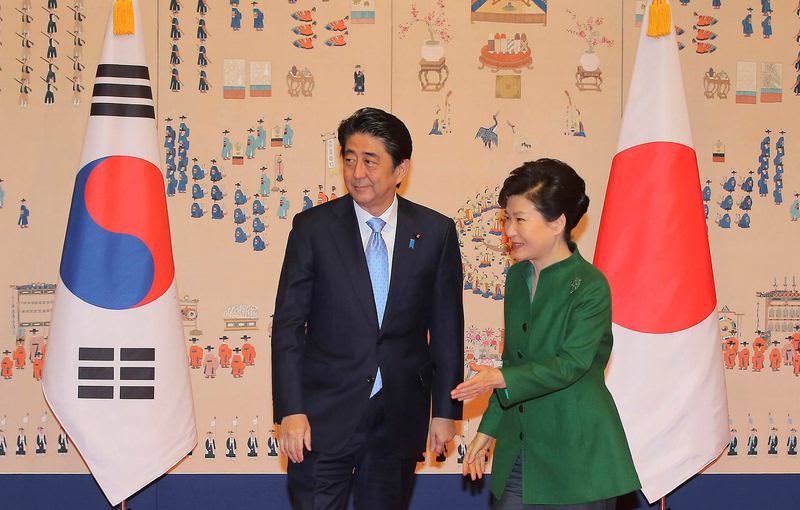 by Associated Press Nov 03, 2015 12:00 am
The leaders of South Korea and Japan resumed formal talks Monday after a 3-year freeze and agreed to try to resolve the decades-old issue of Korean women forced into Japanese military-run brothels during World War II. The agreement is a step forward but not a breakthrough. Ties between the two countries have sagged to one of their lowest ebbs since the late 2012 inauguration of Japanese Prime Minister Shinzo Abe, who takes a more hawkish, nationalistic stance than many of his predecessors. Seoul believes that Abe seeks to obscure Japan's brutal colonial rule of the Korean Peninsula in 1910-1945.

The biggest source of friction is over Japanese responsibility for wartime sex slaves, who were euphemistically called "comfort women." Historians say tens of thousands of women from around Asia, many of them Korean, were sent to front-line military brothels to provide sex to Japanese soldiers. Japan has apologized many times before, but many South Koreans see the statements and past efforts at private compensation as insufficient. Abe hoped to weaken a 1993 apology but later promised not to do so following protests from South Korea and elsewhere. On Monday, Abe and South Korean President Park Geun-hye agreed to try harder to settle the issue through dialogue, according to Park's office. "President Park noted the issue of 'comfort women' is the biggest obstacle in efforts to improve bilateral ties. She stressed that the issue must be quickly settled in a way that our people can accept," said Park's senior adviser for foreign affairs and national security, Kim Kyou-hyun. Abe confirmed the agreement. "On the comfort women issue, I think the issue should not become an obstacle for the next generation so we can build future-oriented cooperative relations," he told reporters after the meeting. "We have agreed to speed up our negotiations toward a resolution as soon as possible."

Their closely watched meeting came a day after they joined a three-way summit with China's premier and agreed to improve ties strained over historical and territorial disputes. Many in China also harbor similar resentment against Japan. Nothing major came from the trilateral summit in Seoul. But just sitting down together was seen as a positive sign after the gap in such meetings, which used to be an annual affair. A joint statement said the three agreed to try to resolve the issues by "facing history squarely and advancing toward the future," boosting exchanges, and cooperating in economic, cultural and other areas.

Despite their harsh history, South Korea, Japan and China are closely linked commercially. China is the largest trading partner for both South Korea and Japan, while South Korea and Japan are each other's third-largest trading partners. The last two-way summit between Japan and South Korea was in May 2012, when Park's predecessor, Lee Myung-bak, met with then Japanese Prime Minister Yoshihiko Noda. Park has faced calls at home to improve ties with Japan. South Korea and Japan together host about 80,000 U.S. troops, the core of America's military presence in the Asia-Pacific. Washington wants to solidify its alliances with the two countries to better deal with a rising China and with North Korean threats. Park and Abe agreed Monday to strengthen South Korean-Japanese-U.S. relations to deal with North Korea. On Sunday, they and Chinese Premier Li Keqiang said they would make further efforts to resume stalled negotiations on ending North Korea's nuclear weapons program.
RELATED TOPICS