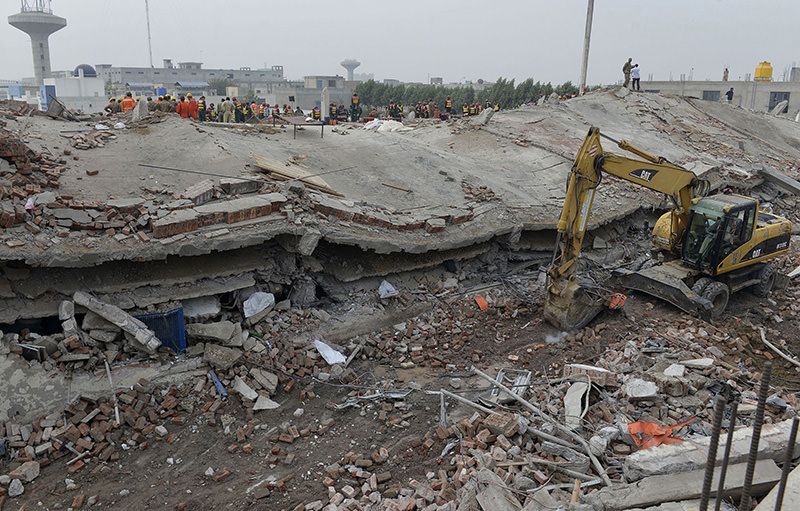 by French Press Agency - AFP
Nov 08, 2015 12:00 am
The death toll from the collapse of a factory in eastern Pakistan rose to 44 on Sunday as rescuers said that hopes of recovering more survivors were growing increasingly slim.

The incident,which took place near the Punjab provincial capital of Lahore on Wednesday, has underscored poor safety standards in the underdeveloped South Asian country of 200 million.

"Forty-one bodies have been recovered and three wounded workers who were rescued alive, died at hospital," Muhammad Usman, a top administration official in Lahore, told AFP.

He said that 40 percent of the debris from the collapsed building had been removed and rescuers were continuing the search with great care in case there were more "miracle" survivors trapped beneath the debris, but added that the chances of that were very slim more than 72 hours after the collapse.

On Saturday rescuers pulled a teenage boy alive from the rubble 50 hours after the structure toppled.

The teenager had been trapped for more than two days and his family, thinking him dead, had already identified and buried another recovered body they believed to be his.

Officials have said at least 150 people were in the factory when it came down and it was unclear how many -- dead or alive -- may still be trapped.

Punjab chief minister Shahbaz Sharif has said the factory may have suffered structural damage in a 7.5 magnitude earthquake last month, which killed almost 400 people across Pakistan and Afghanistan.

Provincial labour minister Raja Ashfaq Sarwar said that an inquiry into the collapse "is being conducted and we will probe all angles", with a report to be submitted within two weeks.

At least 24 people died last year when a mosque collapsed in the same city, while more than 200 people lost their lives, mostly due to collapsed roofs, following torrential rain and flooding in 2014.

In 2012, at least 255 workers were killed when a fire tore through a clothing factory in Karachi, one of the deadliest industrial accidents in Pakistani history.
Last Update: Nov 08, 2015 10:34 am