Concerns as Rohingyas barred from voting in Myanmar 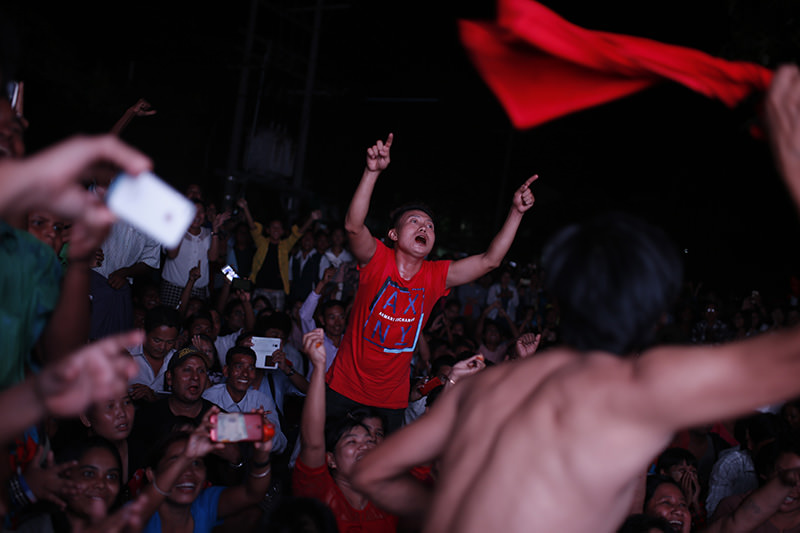 by Daily Sabah with AP Nov 08, 2015 12:00 am
Millions of citizens voted Sunday in Myanmar's historic general election that will test whether the military's long-standing grip on power can be loosened, with opposition leader Aung San Suu Kyi's party expected to secure an easy victory.

In a country that was under military rule for almost a half-century, many of the eligible 30 million voters cast ballots for the first time in what was been billed as the nation's freest election ever. It was the first time even for Suu Kyi, the epitome of the democracy movement who had defied the junta for decades.

Vote counting began immediately with hundreds of supporters gathered under umbrellas outside the opposition National League for Democracy party's office. The official results were yet to be announced.

Although more than 90 parties are contesting, the main fight is between Suu Kyi's National League for Democracy party, and the ruling Union Solidarity Development Party, made up largely of former junta members. A host of other parties from ethnic minorities, who form 40 percent of the country's 52 million people, are also running.

Certainly though, the election will not bring full democracy to this nation, which spent nearly five decades under brutal military rule and the last five years under a quasi-civilian government. Myanmar's constitution guarantees 25 percent of seats in Parliament to the military, and was rewritten to keep Suu Kyi, the country's most popular politician, from the presidency. This time, however, there is hope that the election will move Myanmar a step closer to democracy.

Even if Suu Kyi's party secures the highest number of seats in the bicameral Parliament in Sunday's vote, it will start with a disadvantage because of the reserved seats for the military in the 664-seat Parliament.

Suu Kyi cannot run for president or vice president because of a constitutional amendment that bars anyone with a foreign spouse or child from holding the top jobs. Suu Kyi's sons and late husband are British. The military is also guaranteed key ministerial posts defense, interior and border security. It is not under the government's control and could continue attacks against ethnic groups. But critics are most concerned about the military's constitutional right to retake direct control of government, as well as its direct and indirect control over the country's economy.

There are concerns also about the vote's credibility, because for the first time about 500,000 eligible voters from the country's 1.3-million-strong Rohingya Muslim minority have been barred from casting ballots. The government considers them foreigners even though many have lived in Myanmar for generations. Neither the NLD nor the USDP is fielding a single Muslim candidate.

Abdul Melik, a 29-year-old Rohingya, spent election day watching other people vote. He stared out from a camp on the outskirts of western Rakhine state's capital, Sittwe, where the Rohingya are forced to live in squalid camps and can't leave without official approval. "I can see the Buddhist Rakhine, the Kaman Muslim and Hindus voting at a polling station close to the barricades," he said in a telephone conversation. "We were hoping that somehow we'd be allowed to vote. But today I have lost hope of any change in my lifetime." "This is the day that hope ends," he added.

The Rohingyas are not recognized as one of the 134 official ethnicities of Myanmar because authorities view them as illegal immigrants from neighboring Bangladesh. They are subjected to forced labor, have no rights to own property and are heavily oppressed under the Burmese dictatorship. They have no permission to leave the camps built for them, have no source of income and have to rely on the World Food Program to survive. The U.N. considers Rohingyas to be one of the most persecuted minorities in the world.
Last Update: Nov 08, 2015 8:14 pm
RELATED TOPICS