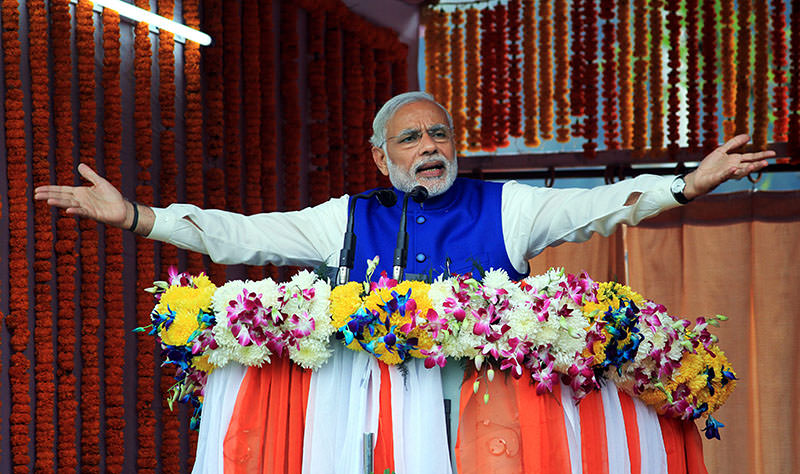 As of Sunday morning, a grand alliance of national and regional political parties -- led by Bihar Chief Minister Nitish Kumar -- was leading with 150 out of 243 seats in the state assembly.

Modi -- who had campaigned vigorously in Bihar, where he addressed 30 separate rallies -- has since conceded defeat in the crucial state polls.

"Had a telephone conversation with Shri Nitish Kumar and congratulated him on the victory," Modi declared via Twitter as early results showed his BJP trailing far behind his electoral rival.

Rahul Gandhi, vice-president of the Indian National Congress party, a component of the alliance, described the early results as a "victory of unity over divineness".

"This is a victory of unity over divineness; humility over arrogance; love over hate," Gandhi asserted. "A victory of the people of Bihar."

Sunday's election result in India's most densely populated state represents a major setback for Prime Minister Modi, who had hoped that his BJP party would defeat former ally Nitish Kumar, who parted ways with the BJP in 2013 after Modi was named as a prime ministerial candidate.

Over the past two weeks, Bihar, a poor state in the country's east, saw bitter campaigning by the BJP in which the party focused on caste, cows -- considered sacred by Hindus -- and communalism.

The electorate, however, appears to have rejected the divisive agenda adopted by Modi's Hindu nationalist party.

"If Modi had stuck to 'Vikas' [development] and 'parivartan' [change] he would have won Bihar," political analyst and columnist Tavleen Singh tweeted. "[But] He changed the subject and this is why he lost."

Last week, BJP President Amit Shah, Modi's right-hand man, told a public rally in Bihar that if the BJP lost the election, the party's electoral defeat would be celebrated in Pakistan -- a remark many analysts found particularly divisive.

In the final phase of the election, the BJP ran advertisements in local newspapers criticizing Kumar for remaining "silent" while his allies "insulted" the "holy cow of every Indian".

Kumar, for his part, highlighted his government's development projects, including road construction and local electricity schemes.

Some analysts interpreted the early election results as a referendum on Modi, as he was the face of the BJP's electoral campaign.

"Modi's party promised free laptops to the people of Bihar at a time when prices of essential commodities are at an all-time high," Mustafa Khan, author and political analyst, told Anadolu Agency.