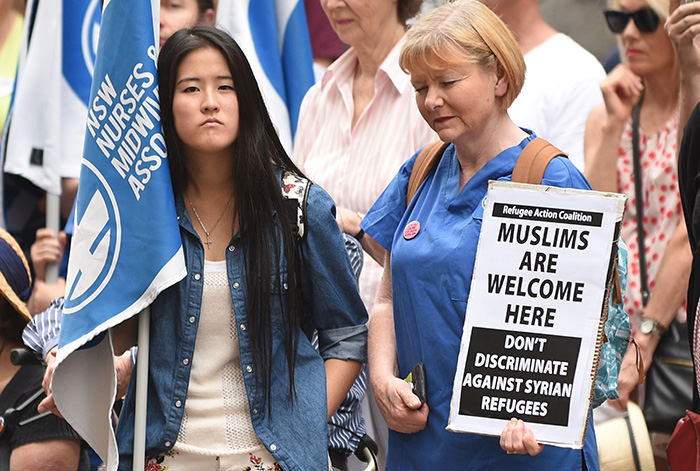 A demonstrator (Left) representing the NSW Nurses and Midwives' Association at a rally in support of refugees and asylum seekers in Sydney (AFP Photo)
by Compiled from Wire Services
Nov 10, 2015 12:00 am
Criticisms over Australia's strict stance toward migrants intensified after a riot at an offshore detention center made headlines this past weekend.

Australia had to fly extra police to another detention center on Christmas Island in the Indian Ocean yesterday to quell a riot. Hours before the celebrities' petition was handed to parliament in Canberra, an Australian delegation to a UN human rights forum in Geneva was being lambasted over the treatment of asylum seekers.

More than 100 countries in Geneva have lined up to express criticism of Australia's asylum seeker policy and what they referred to as the inhumane treatment of its indigenous people. Friends and foes alike took the opportunity to slam Australia's human rights record during a performance review by the UN Human Rights Council (UNHRC).

Turkey took umbrage at Australia's treatment of refugees at offshore immigrant detention facilities in Nauru and Papua New Guinea. "We remain concerned about Australia's protection of the rights of migrants, especially of women and children at offshore facilities," Turkey's delegate Umut Deniz underlined.

The Universal Periodic Review is a review UN member states are subject to every four years as part of their UNHRC obligations. Australia has come under fire for its offshore processing of asylum claims, turning back boats and holding children in detention. Other concerns raised included the sterilization of disabled people, the high level of violence against women and the spread of Islamophobia.

Australian Greens Immigration spokesperson Sarah Hanson-Young noted in a statement Tuesday that even "Australia's closest allies, like the U.S., U.K. and Canada, are appalled by the way we treat people seeking asylum."

According to News Corporation reports, Andrew Goledzinowski, Australia's ambassador for People Smuggling Issues, said more than 1,200 migrants have died in attempts to reach the country by boat, prompting the Australian community to decide it could "no longer tolerate such a level of carnage." He said that deterrent policies meant that in the last 18 months the number of asylum seekers who have died at sea was zero.
However, Professor Gillian Triggs, president of the Australian Human Rights Commission, commented that there were some points in Australia's response that were "deeply misleading." "About 75 percent of recommendations were about detention centers, mandatory detention especially in relation to children and the stop-the-boats policy that failed to recognize the rights of asylum seekers? That was probably the majority view," Triggs said. "There is real international concern about Australia's asylum-seeker policies? [there is] a disappointment that we have strayed from our international obligations." Around 700 men, women and children are being held on Nauru, and about 800 men on Manus Island off Papua New Guinea.
Last Update: Nov 10, 2015 2:30 pm