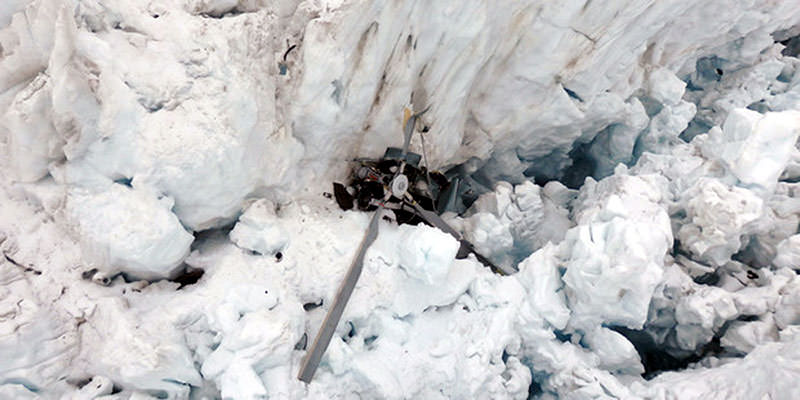 In this photo provided by New Zealand Police, the wreckage of a helicopter carrying tourists is seen crashed in a crevasse on Fox Glacier, a scenic glacier in South Island, New Zealand (AP Photo)
by Anadolu Agency Nov 21, 2015 12:00 am
Seven people have died in a helicopter crash while on a sightseeing trip over a New Zealand glacier.

The seven -- six of whom were tourists -- were killed Saturday when the chopper went down in a heavily crevassed area of the Southern Alps on the country's southern west coast.

New Zealand website Stuff reported a local police inspector as saying that the chopper is now stuck in a crevasse 762 meters (2,500 feet) up the valley.

Inspector John Canning added that debris from the crash is scattered hundreds of meters around the site and recovery of the dead would be very difficult in the dangerous terrain.

"I'm not going to risk any more lives, we've lost seven," the news website reported him as saying.

Police are trying to locate the victims' -- thought to be from Australia and the United Kingdom -- next of kin.

The Fox Glacier -- around 13 kilometers (8.1 miles) long, and one of the most accessible glaciers in the world -- is a major tourist attraction and is visited by around 1,000 people each day during peak season.