Bangladesh increases security measures ahead of scheduled execution of politicians 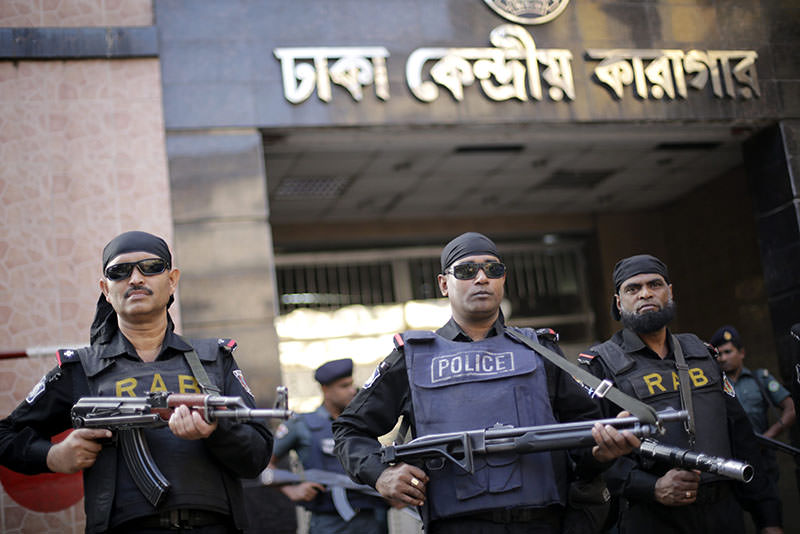 President Abdul Hamid will consult Prime Minister Sheikh Hasina as per the constitutional provisions for his decision, the law minister said. But Huq did not say how quickly the petition will be considered.

The government deployed paramilitary troopers in the capital to maintain order ahead of the execution.

Jamaat e Islami is one of the partners of the BNP-led opposition alliance of former prime minister Khaleda Zia. BNP and Jamat formed a coalition government in 2001.

Some 2,000 troops from Border Guard Bangladesh have started patrolling city streets along with other security forces, said Mohammad Mohsin, a spokesman of the border force.

Police have shut down roads to and from Dhaka Central Jail, where authorities have prepared the gallows for the two politicians, said a police officer.

Shops and business establishments near the jail were also closed. Officers could be seen searching bystanders at makeshift checkpoints nearby.

The government on Wednesday blocked social media site Facebook and other microblogging platforms ahead of the execution. Intelligence agencies say they fear the criminals could use the sites for subversive activities.

A special war crimes tribunal, set up by Hasina in 2010, convicted both Chowdhury and Mujahid of genocide, torture and crimes against humanity committed during the nine-month armed struggle in 1971.

Bangladesh's earlier initiative to prosecute war crimes was called off after the 1975 assassination of the country's founding president, Sheikh Mujibur Rahman. He was Hasina's father.

Chowdhury and Mujahid filed review petitions on October 14 after the appeal court upheld the death sentences they received in 2013. The review petitions were rejected by the Supreme Court on Wednesday.

Mujahid, secretary general of the Jammat-e-Islami, was convicted of four counts of war crimes on July 17, 2013 while Chowdhury, a standing committee member of BNP, was handed the death sentence on October 1, 2013 after being convicted of nine charges.

Two top-ranking leaders of Bangladesh Jamaat-e-Islami, which opposed the creation of Bangladesh in 1971, have already been executed after verdicts from the tribunal.