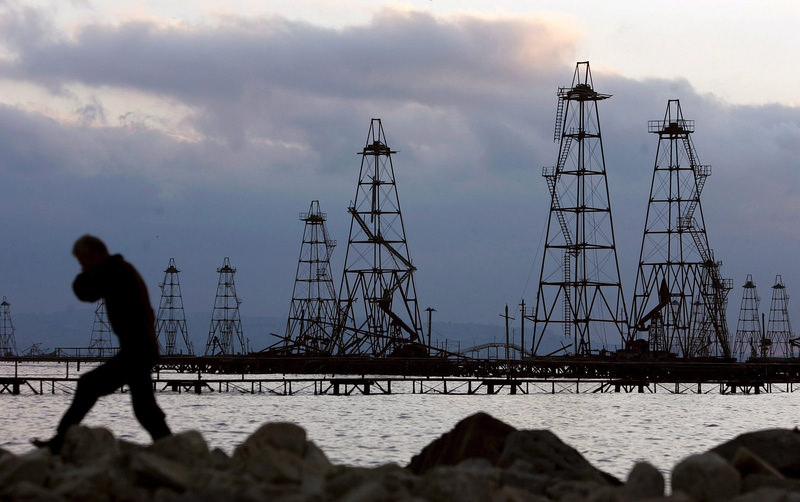 A file photo dated 07 October 2005 showing a worker walking in front of the oil derricks on the Caspian Sea near Baku, Azerbaijan. (EPA Photo)
by Compiled from Wire Services Dec 05, 2015 12:00 am
32 workers have died after an offshore oil platform operated by Azerbaijan's state energy company SOCAR caught fire in the Caspian Sea, the head of an independent committee said on Saturday.


"According to our information, 32 workers died, while 42 workers were rescued last night. ... The fire on the platform was finally extinguished," said Mirvari Gakhramanly, head of Azerbaijan's Oil Workers' Rights Protection Committee.

While the SOCAR oil company said that one worker was killed, 30 were missing and 33 were rescued Saturday after a fire swept through a Caspian Sea.

The missing workers were in a lifeboat that fell into stormy seas, according to a joint statement issued late Saturday by SOCAR, the country's emergency services and the prosecutor general's office. It was unclear if any of the missing workers would be found alive.

No official statement has yet been made by the Azeri government.

SOCAR said on Friday that the fire on a platform in Azerbaijan's Guneshli oil field had started after a gas pipeline on the platform was damaged in heavy wind. It said rescue attempts were being complicated by a severe storm.

One worker called a Reuters correspondent from the platform and said there were 84 people trapped there. The worker did not want to be named. It was not clear whether his statement was now out of date.


SOCAR said on its Facebook page on Saturday that 26 workers had been rescued from the platform. It did not give details on whether there had been deaths or how many people were initially on the platform.

Around 60 percent of SOCAR's oil production passes via the platform where the fire broke out, meaning the company's output will be temporarily hit.

The bulk of Azerbaijan's oil is produced elsewhere, however, including on fields operated by British oil major BP.

BP Azerbaijan was not available for comment on Saturday on whether adverse weather in the Caspian or the fire on SOCAR's platform had affected its production.

In a separate incident, SOCAR said on Friday that three workers were missing from another of its offshore oil platforms in the Caspian after an accident during the storm. The workers were still missing as of Saturday.