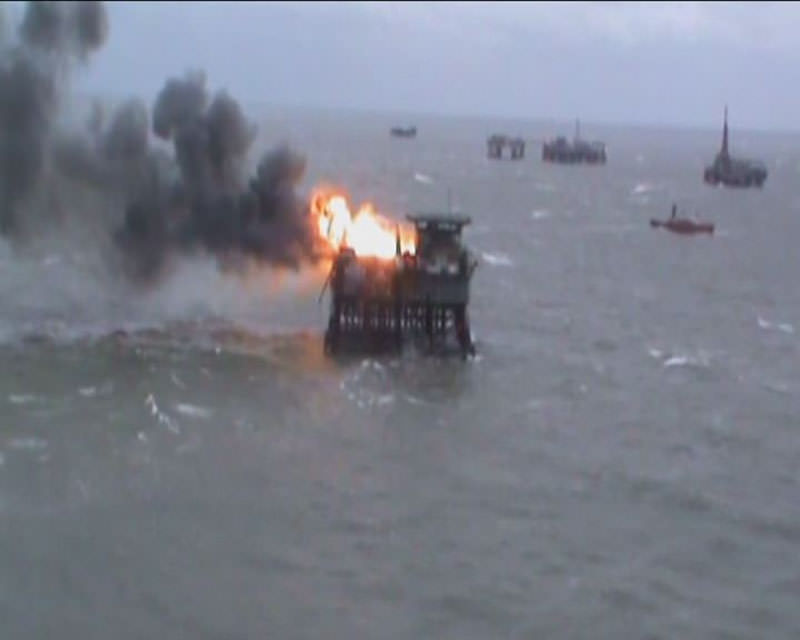 by Dec 06, 2015 12:00 am
On Sunday, Azerbaijani officials were searching for 29 missing oil workers after a storm caused their offshore oil rig to catch fire as President Ilham Aliyev ordered an official day of mourning.

A fire broke out on the rig in the Caspian Sea after a storm on Friday, "leading to many deaths," according to a statement on the official website of the president. "I join the relatives in their grief and designate Dec. 6 as a day of mourning in Azerbaijan," he is quoted as saying. He ordered flags to be flown at half-mast and entertainment programs cancelled, officials said.

Aliyev's statement was nearly an official confirmation that 30 workers have likely perished at sea when one lifeboat where the crew was taking refuge fell into the water. Rescue workers had lifted a total of 33 people from the rig, the open water and from a lifeboat that was suspended 10 meters (35 feet) above the stormy waters. However, a second lifeboat fell into the water and has not been recovered. The workers were wearing life vests, according to the company, and some of them were recovered from the sea at a considerable distance from the rig.

So far, the body of one worker has been found. The SOCAR State Energy Firm published a list of the 62 names of its employees working on the rig, who were either rescued or missing. "We are looking for 29 people. Whether they are alive or dead we don't know. Before we find them we cannot pronounce them dead," company vice-president Khoshbakht Yusifzade said at a press briefing on Sunday.

Eleven helicopters were still searching for the lifeboat but it may have already drifted out of Azerbaijan's waters. It was last seen from the air 50 kilometers (30 miles) from the rig, SOCAR said, adding that Azerbaijan's government has asked the other Caspian nations of Kazakhstan, Iran, Russia, and Turkmenistan to aid in recovering the bodies if necessary.

On Friday, the storm damaged a gas line on platform number 10 in the deep water Guneshli section of the Azeri-Chirag-Guneshli offshore oil field, causing a fire, according to SOCAR. The fire was still burning on Sunday, but SOCAR said it would be extinguished by the evening.

Prosecutors opened a probe on Saturday into possible "breaches of fire safety regulations." The Guneshli deposits were discovered in 1981 in the south Caspian Sea, some 90 kilometers (55 miles) east of the Azeri capital of Baku.

A predominantly Muslim country with a population of nine million people wedged between Russia and Iran, Azerbaijan is a key partner in projects which deliver Caspian Sea energy reserves to the West through pipelines running through Turkey, bypassing Russia. There have been a number of fatal incidents on offshore oil rigs in recent years.

In 2011, a drilling platform sank during a storm off Russia's far eastern coast, killing 53 people. In 2010, an explosion on the BP-owned Deepwater Horizon rig killed 11 workers and sent millions of barrels of oil spewing into the Gulf of Mexico.