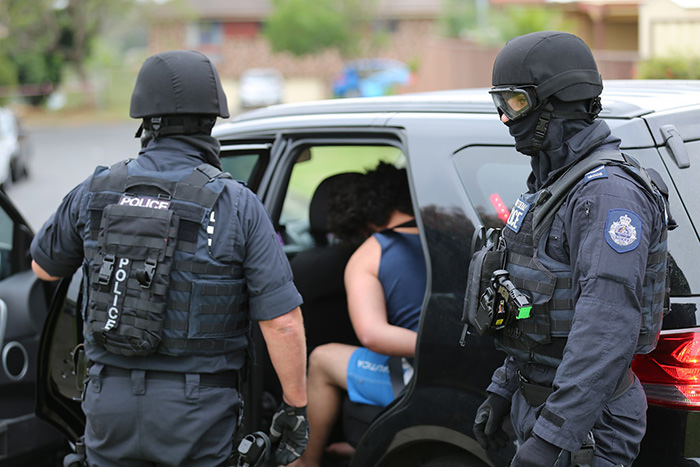 Man (Center) being arrested during a counter-terrorism operation in Sydney (AFP Photo)
by Anadolu Agency Dec 10, 2015 12:00 am
A 15-year-old has become the youngest Australian to be charged with terrorism-related offenses following his arrest Thursday morning after being under police surveillance since raids last year.

The student, who can't be identified for legal reasons, was among five individuals charged in Sydney with conspiracy to plan a terrorist attack.

According to the local Fairfax news agency, he had been convicted of possessing a firearm four months ago.

Police allege the teenager and 20-year-old Ibrahim Ghazzawy, from the Sydney suburb of Raby, are associates of those responsible for the murder of a New South Wales Police employee by another 15-year-old in Parramatta in September.

Ghazzawy and the 15-year-old were arrested and charged Thursday after Australian Federal Police (AFP) and New South Wales Police carried out counter-terrorism raids as part of a high-stakes operation, code-named Operation Appleby.

Another three men -- already in custody and aged 21, 22 and 22-have been charged with "conspiracy to conduct an act in preparation for a terrorist act."

Police allege the conspirators were involved in "formulating documents connected with preparations to facilitate, assist or engage a person to undertake a terrorist act."

ABC reported Thursday night that handwritten notes reveal that Australia's Federal Police were among the targets in an alleged plot uncovered in Dec. 2014 to attack the force's building in Sydney.

Phelan said the documents seized in the raids-including the handwritten notes-had gone through painstaking analysis and mentioned the AFP headquarters.

"The planning documents were evolving. There's one mention of AFP building but they get the address wrong," he said.

New South Wales' deputy police commissioner told a media conference Thursday that police had had a lot of contact with the 15-year-old boy's school in a bid to "prevent radicalization before it gets to the point where people decide to act it out in violence."

"A lot of the people we are dealing with ... are clearly radicalized to the point of talking about and acting out with violence," Cath Burn said.

She added that while she is not aware of a direct connection between the teenager who killed the police accountant -- and was then shot dead himself-and the arrested student, "the people who were involved with the murder of [accountant] Curtis Cheng are associates of these people."

The five people charged Thursday, including the 15-year-old, face the prospect of life imprisonment, the maximum sentence for conspiracy to conduct an act in preparation for a terrorist act.

The group's access to firearms found at the home of one of the men last year is particularly concerning, police told Fairfax Media.

The arrest of the teenager has renewed calls for the way Australian authorities deal with at-risk teens.