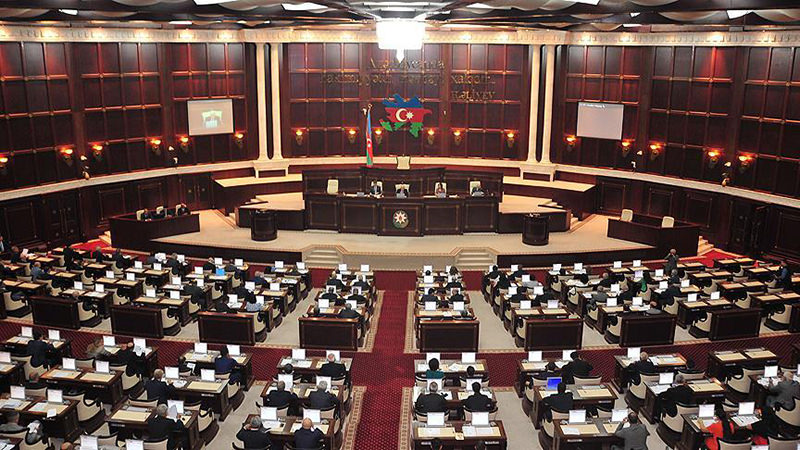 | AA Photo
by Daily Sabah Dec 23, 2015 12:00 am
A bill on suspending all relations with the U.S. and prohibiting the entry of U.S. officials to Azerbaijan has been submitted to Azerbaijani parliament on Wednesday .

The bill submitted by MP Rovshan Rzayev foresees a visa sanction to "individuals representing the U.S. government along with their family members, congressmen and senators, leaders of media outlets, experts conducting a smear campaign against Azerbaijan and officials cooperating with Armenian diaspora lobby groups".

Envisaging the termination of cooperation with the U.S. in trade, energy, military and security, the bill recommends that all contacts between Azerbaijani state officials and U.S. companies must be suspended, while all contracts with U.S. private sector representatives to be canceled.
The bill claims that the U.S. has been using 'double-standards' against Azerbaijan, especially on 'human rights'.

"The U.S. is trying to intervene in its [Azerbaijan's] domestic and foreign policy by a variety of means, one of which is to have a country under constant pressure by demonstrating a biased stance on issues like human rights and democracy," the bill said, as reported by Azerbaijan's APA.

The document openly calls for "an end to the flagrant violation of human rights" in the U.S. while asking Azerbaijan "to review the cooperation and bilateral relations formed over the years" with the country.

Underlining that the U.S. has so far only adopted four of the 14 major U.N. documents on human rights, the bill pointed out that the U.S. remained the only country -along with Somalia- that hasn't joined the convention on children's rights.

Citing recent events and the increase in xenophobia, Islamophobia and racial discrimination, the bill says that the U.S. has implemented many restrictions on freedom of expression and press.

The bill also blames U.S. intervention in Iraq, Libya, Syria and Yemen as the cause of civil wars and disruption of the territorial integrity of these countries.

In the bill, the U.S. is also criticized for corruption, fraud in elections, interference in other countries internal affairs and conducting campaigns to discredit the Republic of Azerbaijan.
The document ends with a call to the U.S. to take an unambiguous stance on the Armenian-Azerbaijani dispute of Nagorno-Karabakh in line with international law.
Last Update: Dec 24, 2015 9:31 am
RELATED TOPICS