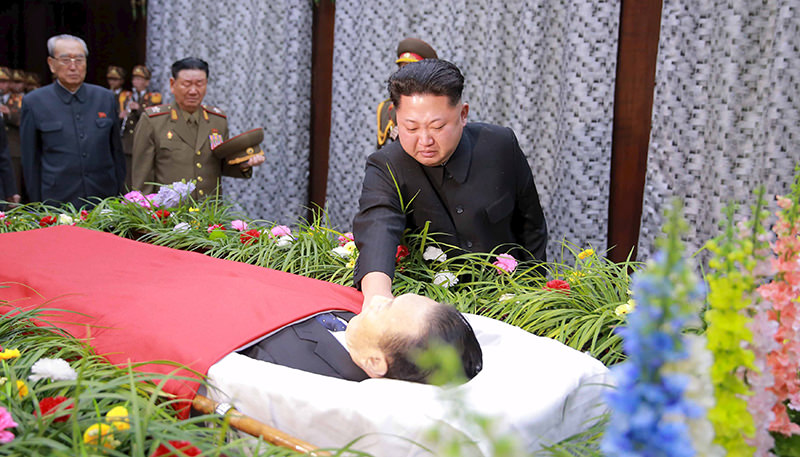 Kim Yang-Gon, a top party official and key confidante to Kim Jong-Un who oversaw relations with the South, died in a traffic accident on Tuesday, official media said. A state funeral was held early Thursday.

Leader Kim has earned a reputation for ruthlessness after having his uncle executed and sacking other high-ranking officials in a purge to consolidate his reign which began in 2011 when he replaced his father Kim Jong-Il.

Analysts have said that more foul play in the death of Kim Yang-Gon could not be ruled out, citing possible jealousy among political rivals.

But the tone used in official news reports Thursday was in stark contrast to those announcing past political purges, with Kim Yang-Gon described in glowing terms.

North Korea's state-run newspaper Rodong Sinmun carried a front page picture showing a grieving Kim touching the face of his aide whose remains were laid on a bier decorated with flowers.

"He could hardly repress his bitter grief for a long while, his hands put on the cold body of the revolutionary comrade", the official news agency KCNA said.

"Kim Yang Gon was his faithful helper and close comrade-in-arms whom nobody can replace, he said," it added.

Other photos showed Kim, accompanied by party and military officials, bowing deeply in front of the bier during their visit on Wednesday.

KCNA's 2013 announcement of the death of Jang Song-Thaek meanwhile condemned him as a "traitor" to the nation and derided him as "despicable human scum... worse than a dog".

The North did not reveal details about the accident said to have killed Kim Yang-Gon, but a disproportionately high rate of fatal crashes among the North's powerful elites has been attributed to reckless driving, often under the influence of alcohol.

Their vehicles sport distinctive plate numbers allowing them to flout traffic laws, while they often attend inner-circle feasts or parties without chauffeurs, according to defectors.

Meagre infrastructure including dark, pot-holed streets in the suburbs where such exclusive parties take place are also to blame, the South Korean daily Joongang Ilbo said.

Kim Yang-Gon's predecessor Kim Yong-Sun, who helped arrange the first North-South summit in 2000, also perished in what was described as a traffic accident in 2003.

Ri Je-Gang, another top party official, also reportedly died in a car crash in 2010 at a time when he was rumoured to be involved in a power struggle with Jang Song-Thaek.