Seven killed in attack on Indian air base near Pakistani border 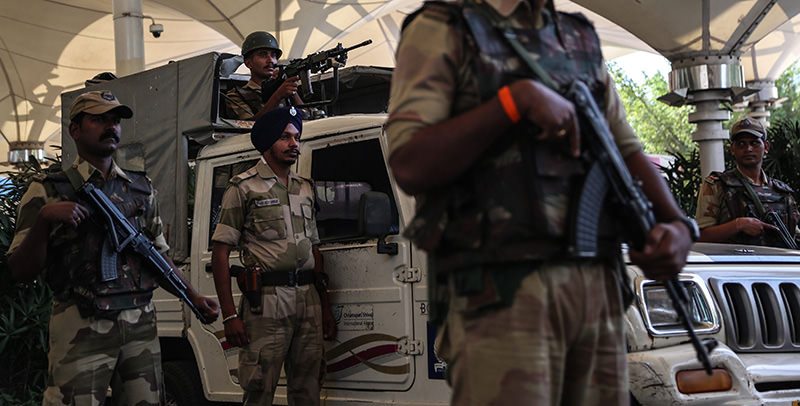 by Anadolu Agency Jan 02, 2016 12:00 am
Seven people were killed, including four militants, after a group of suspected Pakistani militants launched an attack at an Indian Air Force (IAF) base, leading to a fierce gunbattle between the militants' and the security forces early Saturday morning.

The IAF base is located in Pathankot area in northern state of Punjab, close to the India-Pakistan border.

An official in the Indian army said that at least four militants wearing army fatigues struck the air force base at around 3.15 a.m early Saturday morning [2145GMT Friday]. "Soon after the terror attack, an operation was launched and four militants were killed," a senior army official in Punjab told Anadolu Agency. "Three of our soldiers have lost their lives and several people have been wounded in the operation."

The army official said that a manhunt has been launched to gun down at least two more militants, who are believed to have survived. "The IAF choppers and the fighter jets are safe," the official said.

Saturday's attack came a day after a top Punjab police officer was abducted by a group of armed men in Pathankot. The officer managed to escape, but the armed men captured his driver along with the vehicle and cellphone.

The incident led to the state government issuing an alert across the state Friday.

A team of National Security Guard (NSG) commandos was called in from New Delhi, in view of the possible terror attack in the state.

Reacting to the incident, Indian Home Minister Rajnath Singh has said any "terrorist attack on India will get a befitting response".

Meanwhile, after the attack in Pathankot, security has been heightened across the country. "The security has been increased in national capital Delhi and Punjab," a senior official in New Delhi told Anadolu Agency.
Last Update: Jan 02, 2016 2:22 pm
RELATED TOPICS