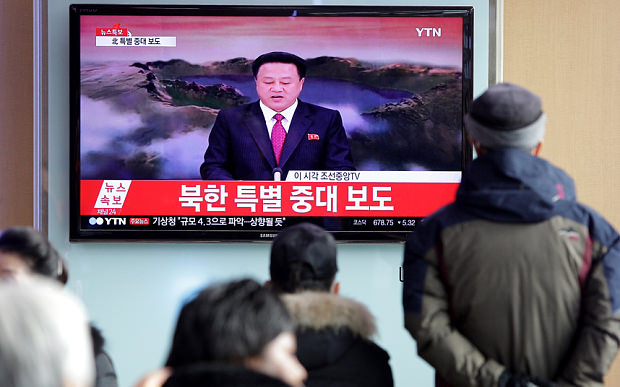 by Compiled from Wire Services Jan 06, 2016 12:00 am
North Korea said it conducted a powerful hydrogen bomb test on Wednesday, a defiant and surprising move that, if confirmed, would be a huge jump in Pyongyang's quest to improve its still-limited nuclear arsenal.

South Korea's spy agency and outside nuclear experts cast strong doubt, however, saying the estimated explosive yield from North Korea's fourth nuclear explosion was much smaller than what even a failed H-bomb detonation would produce. The doubts didn't stop jubilation and pride in Pyongyang. A North Korean television anchor, reading a typically propaganda-heavy statement, said a test of a "miniaturized" hydrogen bomb had been a "perfect success" that elevated the country's "nuclear capabilities might go to the next level." A large crowd celebrated in front of Pyongyang's main train station as the announcement was read on a big video screen, with people taking videos or photos of the screen on their mobile phones and applauding and cheering.

North Korea's claim that it carried out a successful hydrogen bomb test on Wednesday drew swift condemnation from friends and foes alike.
China said it "firmly opposes" its neighbor's actions while others blasted it as an intolerable provocation that must be punished. Several governments promised a firm response as tensions soared again in Northeast Asia, with many calling for further action by the United Nations against the North, which is already subject to an array of international sanctions.

China, North Korea's most important diplomatic and economic partner, took a more nuanced stance than others, saying it "firmly opposes" the test and would summon Pyongyang's ambassador for "solemn representations." Beijing is Pyongyang's key provider of aid and trade but relations have become more strained in recent years, in part because of North Korea's persistence with its nuclear program in the face of international condemnation. "We strongly urge the DPRK side to remain committed to its denuclearization commitment, and stop taking any actions that would make the situation worse," foreign ministry spokeswoman Hua Chunying told a regular briefing, using the North's official name.

South Korean President Park Geun-Hye described the test as a "grave provocation" at an emergency meeting of the country's National Security Council. "The test is not only a grave provocation to our national security but also a threat to our future... and a strong challenge to international peace and stability," she said, calling for strong sanctions on Pyongyang.

Japanese Prime Minister Shinzo Abe slammed it as "a serious threat to the safety of our nation." "This clearly violates U.N. Security Council resolutions and is a grave challenge against international efforts for non-proliferation," he said.

In Washington the White House would not confirm the test, but vowed to "respond appropriately to any and all North Korean provocations." The foreign ministry of Russia, also a permanent Security Council member, denounced the test as a "flagrant violation of international law and existing U.N. Security Council resolutions." Other veto-wielding Security Council members Britain and France also joined in the chorus of condemnation.
The test, which came just two days before leader Kim's birthday, was initially detected by international seismology monitors as a 5.1-magnitude tremor next to the North's main Punggye-ri nuclear test site in the northeast. Last month Kim suggested Pyongyang had already developed a hydrogen bomb.

The claim was questioned by international experts and there was continued skepticism over Wednesday's test announcement.
Whether an H-bomb or not, it was North Korea's fourth nuclear test and marked a striking act of defiance in the face of warnings that Pyongyang would pay a steep price if it continued pursuing its atomic weapons program. The three previous tests in 2006, 2009 and 2013 triggered waves of U.N. sanctions. Their failure to prevent a fourth detonation will see calls for more drastic Security Council action this time around.
Last Update: Jan 06, 2016 4:33 pm
RELATED TOPICS