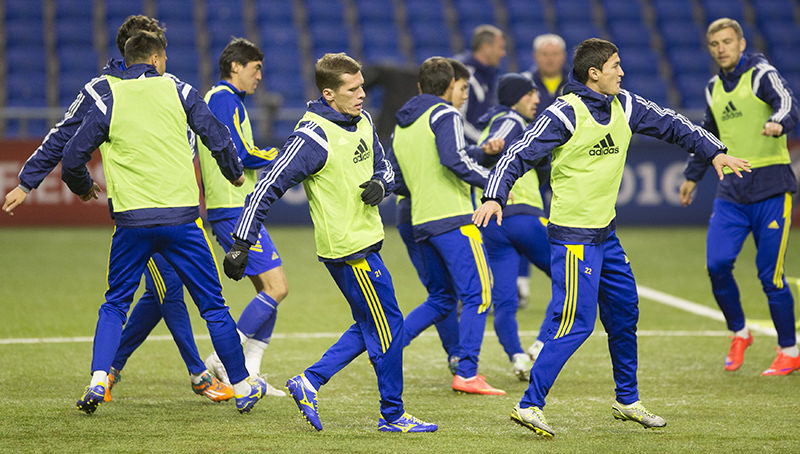 Kazakhstan's national soccer team players attend a training session at the Astana Arena stadium in Astana, Kazakhstan, October 9, 2015. (Reuters Photo)
by Associated Press Jan 11, 2016 12:00 am
Kazakhstan fans could choose their country's next national team coach in an online vote as part of a rare democratic experiment in international soccer.

Fans have been offered a choice between a Kazakh or foreign coach on the federation's website. In the second round, fans will pick a name from a list of coaches, federation spokesman Dmitry Nesterenko told The Associated Press.

The candidates will all be realistic hires rather than global stars, Nesterenko said, with "basically, no (Jose) Mourinho," who recently left Chelsea.

However, the Central Asian nation's foray into Internet democracy has been hampered by low participation.

The federation said 50,000 votes would be needed to consider the vote valid, but barely 5 percent of that figure had been reached as of Monday evening, with only four days to go. There was a clear preference for a foreign coach, that option leading by 1,732 votes to 836.

"There aren't really any problems with popularizing football. People go to the football, watch it, but I can't say why no one is voting," Nesterenko said.

There is no guarantee that all the votes were cast by Kazakh supporters. Registration is open to registered users of the federation's website, but there is nothing to stop foreigners from going through the automated registration process and casting votes.

Soccer in Kazakhstan reached a milestone this season when FC Astana became the first Kazakh team to play in the group stage of the Champions League. While it didn't qualify for the knockout stages, Astana managed to remain unbeaten at home in its group games.

However, that success has yet to transfer to the national team, which failed to reach this year's European Championship, winning only one of 10 qualifying games. Kazakhstan's last four coaches have been foreigners, most recently Yuri Krasnozhan of Russia.
Last Update: Jan 11, 2016 4:14 pm
RELATED TOPICS