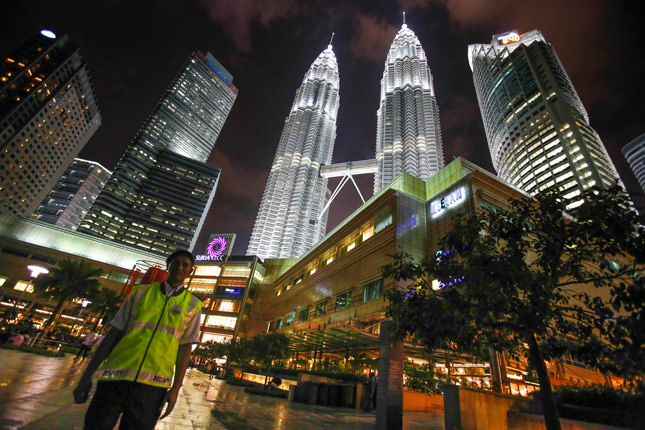 by Anadolu Agency Jan 17, 2016 12:00 am
The day after Malaysia's police force announced it had nabbed a suspected Daesh-linked militant in capital Kuala Lumpur -- hours before a planned suicide attack -- its body for intelligence has listed seven potential hotspots for Daesh attack, cautioning the public to avoid the areas.

The spots include the world's tallest twin building, the Kuala Lumpur Twin Towers, and the KL Tower. Others include popular tourist shopping areas, such as Bangsar, Hartamas, Publika, The Curve and Bukit Bintang.

Federal Territories Minister Tengku Adnan Tengku Mansor said police had been instructed to beef up security in the usually crowded areas and signaled the possibility of soldiers being deployed.

"The number of police will be increased in these areas. We will discuss with the Defense Ministry if there's a need to mobilise soldiers," he told reporters in Kuala Lumpur on Sunday.

Meanwhile, Defense Minister Hishammuddin Hussien said later Sunday that the Royal Malaysian Army is ready to be deployed in the areas, to cooperate with the police to counter the external threat.

"The man confessed to the police of a suicide attack plan, which he said he was told to carry out by comrades in Syria. The attack was supposed to be last night at a karaoke or a pub," Inspector General of Police Khalid Abu Bakar said in a statement.

"The suspect is also responsible for hanging IS [Daesh] flags at several locations in Terengganu, Perak, Selangor and Johor, in an effort to warn the government to stop arresting IS members in Malaysia."

Bakar added that the man was one of four individuals with suspected links to Daesh detained in an anti-terror operation launched this week with the help of the Turkish government.

On Sunday, Mansor underlined that Daesh's motive was to destabilise popular tourist destinations and create a climate of fear.

"There are people who want to cause trouble and are jealous of our achievements. They are targeting places crowded with tourist like what happened in Indonesia," he added.

On Thursday, eight people -- including four Daesh-linked attackers -- died and 30 people were injured in terror attacks on a shopping mall in central Jakarta.

Mansor urged the public to come forward if they noticed anything suspicious or if they have information on any terror-linked activities.
Last Update: Jan 18, 2016 12:11 am
RELATED TOPICS