Officials attempting to transfer Afghan woman, whose nose was cut off by husband to Turkey 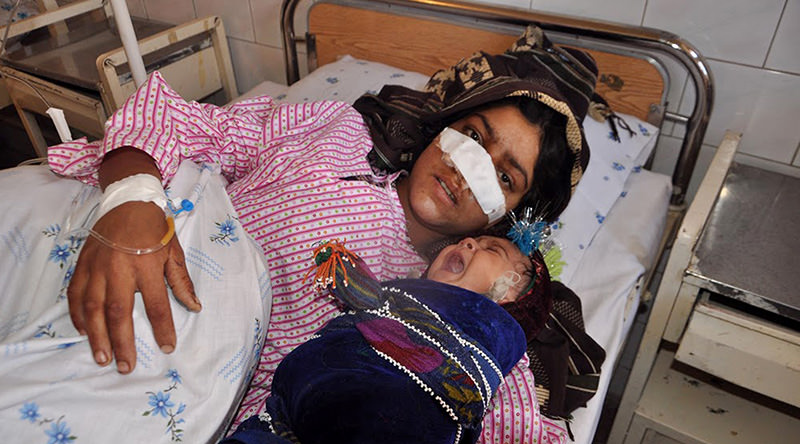 Afghan woman Reza Gul, 20, and whose nose was sliced off by her husband in an attack, lies on a bed with her baby as she receives treatment at a hospital in the northern province of Faryab on January 19, 2016 (AFP Photo)
by Compiled from Wire Services Jan 19, 2016 12:00 am
A young woman in a remote northern region of Afghanistan had her nose cut off by her husband, officials in the region said on Tuesday.

Gul's husband, 25-year-old Mohammad Khan, has since fled their village. Salimi said the Afghan-Turk Hospital in Maymana was trying to arrange transport for Gul to Turkey for further treatment.

Domestic violence is widespread in Afghanistan, where women are often denied constitutional rights designed to protect them.

Violence has also become somewhat entrenched in Afghan society after 40 years of war, with nearly non-existent mental health care and few options or outlets for a traumatized population.

Hafizullah Fetrat, the head of Fayrab's provincial human rights commission, said violence in the area had risen by at least 30 percent in the past year.

"It's not just in Faryab, it is across the entire north of the country poverty, high unemployment, ignorance about marriage," he said.

Faryab borders Turkmenistan and is among the poorest regions of Afghanistan, with many people relying on government food handouts. Corruption is also rife, and many residents complaining that officials pilfer the aid.

Over the past year, the Taliban's presence in the region has grown. The militant group has intensified its campaign following the drawdown of the international combat mission in 2014.

The district where Gul's family lives is under Taliban control, said Rahmatullah Turkistani, a member of Fayab's provincial council.

Salimi said Khan had returned from Iran three months ago, and since then had repeatedly beaten and tortured his wife.

Community elders and Taliban representatives in their village had tried mediating with the family to help sort out their problems, a traditional method of dealing with marital issues, she said.

"Such incidents would not happen if the government judicial system severely punished attacks on women," added Alema, who goes by one name.
The disfigured woman's photograph was widely shared on social media, prompting calls for tough action against the husband.

Khan had disappeared from the village, and local security forces including the intelligence agency and police were searching for him, said the provincial governor's spokesman Ahmad Jawed Dedar.

The Taliban may also be looking for him. Before cutting off his wife's nose, Khan had promised Taliban leaders in the village that he would stop harming his wife. As the village was under their control, the Taliban would likely find him first, Dedar said.

Severing women's noses is not unheard of in Afghanistan and like most abuse probably happens more often than is publicly acknowledged.

The case of Aisha Mohammadzai shocked the world in 2010 when she appeared on the cover of Time magazine with her nose cut off.