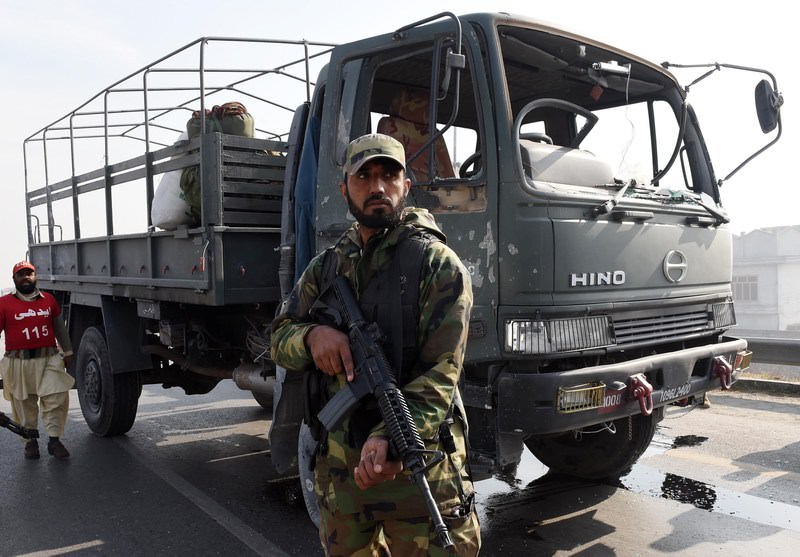 A Pakistan army soldier stands infront of a damaged army vehicle after an Improvised Explosive Device (IED) blast in Peshawar on January 3, 2016 (AFP Photo)
by Associated Press Jan 19, 2016 12:00 am
A suicide bomber riding a motorcycle struck a crowded police checkpoint on the outskirts of the Pakistani city of Peshawar on Tuesday, killing 11 people, a local official said.

Another 21 people were wounded in the blast, which took place on a road leading to neighboring Afghanistan, police official Iqbal Khan said. Peshawar is on the edge of Pakistan's volatile tribal regions, a stronghold of the Taliban and other extremist militants.

Khan said the dead include four police and seven civilians, including two children and a local journalist, Mahboob Shah Afridi, who was president of Tribal Union of Journalists in the neighboring Khyber region.

No one has claimed the attack, which took place as a local police chief arrived at the checkpoint.

Nisar Khan, who was waiting to cross the road, said the checkpoint was choked with traffic at the time of the attack. He said the huge blast left vehicles in flames and that he saw wounded people in pools of blood crying out for help.

Militant violence has declined since Pakistan launched a wide-ranging military offensive in North Waziristan, a tribal region along the border with Afghanistan, in the summer of 2014.

But the Taliban have still managed to carry out major attacks, including an assault on an army-run school in Peshawar in December 2014 that killed over 150 people, mostly children.
Last Update: Jan 20, 2016 5:20 pm
RELATED TOPICS