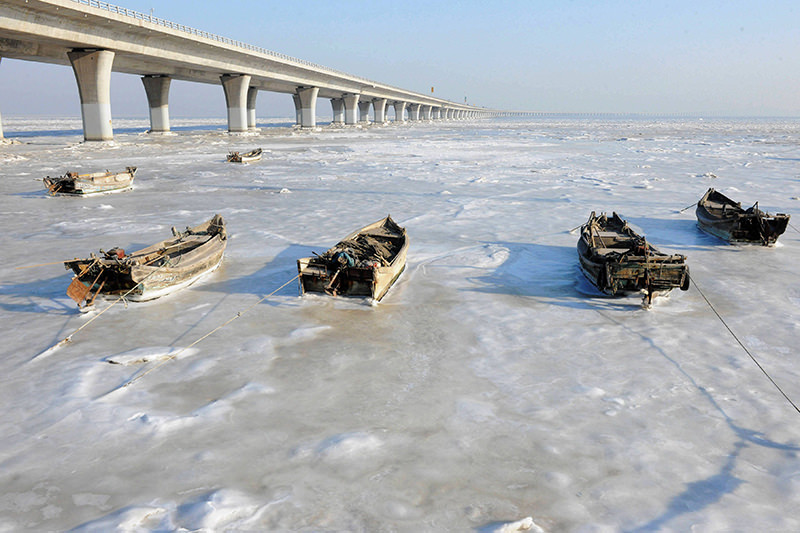 Row boats sit stuck in the ice of the frozen coastal waters of Jiaozhou Bay in Qingdao in eastern China's Shandong province on January 25, 2016. (AFP Photo)
by Associated Press Jan 25, 2016 12:00 am
Unusually cold weather in eastern Asia has been blamed for more than 85 deaths, disrupted transportation and brought the first snow to a subtropical city in southern China in almost 50 years. Here is a look at the worst cold weather to hit the region in years:

Temperatures in Taiwan's capital of Taipei plunged to a 16-year low of 4 degrees Celsius (39 Fahrenheit), killing 57 mostly elderly people, according to government officials. The semi-official Focus Taiwan news website reported that 85 people had died because of the cold.

Most homes in subtropical Taiwan lack central heating, and the cold caused heart trouble and breathing problems for many of the victims, a city official said. Normally, temperatures in Taipei hover around 16 degrees C (60 degrees F) in January, according to Taiwan's Central Weather Bureau.

The cold snap was blamed in the deaths of 40 people in the capital, Taipei, and 17 in neighboring New Taipei City. The cold front also left 9 centimeters (3.5 inches) of snow on Taipei's highest peak.

Most parts of mainland China experienced their coldest weather in decades over the weekend. The southern city of Guangzhou, which has a humid subtropical climate, saw snow for the first time since 1967 on Sunday.

The cold led to the deaths of four strawberry farmers who died of carbon monoxide poisoning when they turned up the heat in a greenhouse in Anhui province in the east, the Xinhua News Agency reported. A woman died in the southwest after the railings on her 24th-floor balcony broke as she leaned over to look at the first snow in Chongqing in 20 years, sending her plummeting.

The cold spell coincided with the beginning of the 40-day travel rush for the Lunar New Year, which is on Feb. 8 this year, disrupting cars, flights and trains. More than 11,000 passengers were stranded at Kunming airport in southern Yunnan province.

Temperatures fell 8 to 16 degrees Celsius from Thursday to Sunday in parts of north China, and temperatures in central and eastern China were 6 to 8 degrees lower than average, Xinhua said.

The National Meteorological Bureau forecast that temperatures in southern China would drop another 3-8 degrees on Monday.

Heavy snow in western and central Japan left five people dead over the weekend and possibly a sixth on Monday.

Kyodo News service said the victims included a woman who fell from a roof while removing snow, a man in a weather-related traffic accident, another man found under a snowplow and a couple that fell into an irrigation channel, apparently while removing snow.

An 88-year-old woman in western Japan's Tottori prefecture died after a landslide hit her house before dawn on Monday, Kyodo and other media reported.

Temperatures in the capital, Seoul, fell to minus 18 degrees Celsius on Sunday, the lowest since 2001. On Saturday, Jeju Island received 12 centimeters (4.7 inches) of snow, the heaviest since 1984, and its airport was closed from Saturday until Monday.

The shutdown stranded about 86,000 people, mostly tourists, on the island and forced the cancellations of about 1,100 flights, according to Transport Ministry and airport officials.
Last Update: Jan 25, 2016 9:30 pm
RELATED TOPICS